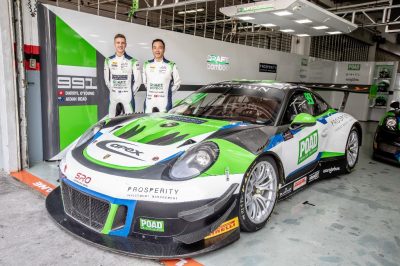 Racing is coming thick and fast for Aidan Read as this month sees the Perth teenager competing twice at the Buriram International Circuit, Thailand, in differing GT3 machinery. In addition, Aidan has just returned from an outing in the China Endurance Series, Shanghai in the LMP3 category.

Aidan is hoping to build on his front row qualifying and fastest race lap achieved in Shanghai with more of the same in the Blancpain GT Series Asia where he returns to the Craft-Bamboo Racing Porsche 991 GT3-R alongside Darryl O’Young.

The pairing will be hoping for improved pace over the first round in Sepang where the Porsche struggled for ultimate performance compared to its rivals in the hot humid conditions. However, with Thailand promising similar weather, expectations remain realistic for what is expected to be a tough weekend. Solid points are the first objective, while a podium would be deemed a bonus.

Following the Blancpain weekend, Aidan will return to Australia to continue his Engineering studies at the University of Western Australia, before returning to Thailand to reunite himself with the Vattana Motorsport Team and their McLaren 650S GT3 for his second outing in the Thailand Super Series.

“My travel and race schedule is intense at the moment,” Aidan explained. “I’ve never been in a race car so often but I’m certainly not complaining!

“Any young driver will tell you that maximising seat time is the most important thing for a developing career and with three International outings in a month, alongside my coaching commitments, I’m certainly getting that.

“Hopefully the experience is showing in my on-track performance. In Shanghai last week I felt I was equal to any challenger in the China Endurance Series. I hope to carry that momentum through into Blancpain Asia and the Thai Super Series coming up.”

Aidan and teammate O’Young are currently sixth in the Blancpain GT Series Asia silver class following the opening round in Malaysia last month.