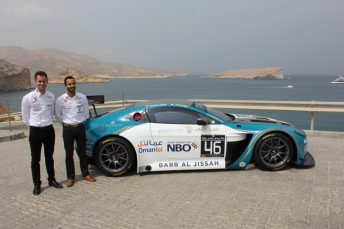 At the glorious Barr Al Jissah resort in Muscat this morning, 35-year-old Ahmad outlined his full plans for the coming year of motorsport with the headline announcement being a ‘Pro-Am’ title bid in the ultra-competitive Blancpain Endurance Cup which gets underway at Monza, Italy, in April.

Continuing his excellent relationship with globally renowned automotive marque Aston Martin, again piloting an Aston Martin V12 Vantage GT3, the Omani will be partnered throughout 2017 by ‘works’ driver Jonny Adam who has been an integral part of Oman Racing for the past two years.

New for this season, the hugely successful Oman Racing entry will be run by reigning British GT champions TF Sport and, in addition to the Blancpain Endurance Cup commitments, the squad will also participate in the Michelin GT3 Le Mans Cup support race to the Le Mans 24 Hours in June and also in December’s Gulf 12 Hours in Abu Dhabi.

Team-mates for the longest races of the season, the aforementioned Abu Dhabi contest, the Paul Ricard six-hour in France in late June and the annual Total 24 Hours of Spa in Belgium, will be confirmed in due course.

“This year we celebrate 10 years of Oman Racing and what better way to do that than by revealing our most exciting season yet”, said Ahmad at today’s launch, which marked the first time Oman Racing has conducted a pre-season unveiling with the race car actually present in the Sultanate, “I’m thrilled to be racing with Jonny [Adam] as my team-mate again and, of course, with Aston Martin.

“Oman Racing’s new partnership with TF Sport is the start of a fresh chapter and we’re determined to mount a very strong challenge in Blancpain this year. I am also extremely excited to be taking part in the Le Mans 24 Hours support race and to be returning to the Gulf 12 Hours. I must say a huge thank you to my incredible sponsors for making Oman Racing such a key part of their plans too.”

Scottish racer Adam, who won the 2015 and 2016 British GT Championship drivers titles, also helped Oman Racing to a top four finish in the Pro-Am standings in the Blancpain Endurance Cup last year, including a memorable second place result in round two at Silverstone Grand Prix Circuit.

Commenting on his continuation with Oman Racing, the 32-year-old said: “I’m very happy to be part of Oman Racing’s programme again for 2017 and delighted to be continuing the partnership with Ahmad, which has developed very well over the last couple of years. The Aston Martin Vantage GT3 is a competitive package in the Blancpain Endurance Cup and from the success TF Sport had in 2016, it looks set to be a very exciting year for Oman Racing.”

TF Sport Director Tom Ferrier added: “This is a hugely exciting programme for TF Sport. The Blancpain GT Series is the toughest GT3 platform in Europe and we relish the chance of competing for honours in the Pro-Am class. Ahmad comes with years of experience in the Aston Martin V12 Vantage GT3 and has proven his mettle in Blancpain over the last few years.

“TF Sport is really looking forward to working with Ahmad and Oman Racing and also exploring the motorsport opportunities that exist in Oman. We have some great partners on board and I am really flattered we have another car in another championship that I believe can bring us more success.”

Major sponsorship portfolio key to 2017 announcement
Crucial to the success of Ahmad’s motor racing programme is the backing of his long-standing portfolio of sponsors and, for 2017, the Oman Ministry of Sports Affairs once again provides essential support to Oman Racing.

Oman Air maintains its presence for a ninth consecutive year while the National Bank of Oman (NBO), Omantel, and Barr Al Jissah – the venue for today’s official season launch – all remain as an integral part of the Muscat racer’s impressive group of commercial partners.

Notably, ahead of the new season, Ahmad is delighted to confirm additional support from brand new sponsor Amouage. The luxury fragrance house, which has been internationally renowned for almost 35 years, is a very exciting addition to the Omani’s impressive sponsorship portfolio.

On behalf of the Oman Ministry of Sports Affairs, Fahad Al Raisi said: “We are very proud to support Ahmad and Oman Racing once again in 2017, our long-standing partnership has been hugely successful and we are delighted Ahmad is again flying the flag for Oman on the international sporting stage. We are looking forward to sharing in the successes we are sure Ahmad’s new racing season will bring.”

Mohamed Al Shikely, Vice President Marketing of Oman Air, commented: “Oman Air has been proud to support Ahmad’s motorsport programme for many years now, this year being the ninth of our successful partnership, and we are relishing the new season. Ahmad is a wonderful ambassador for the Oman Air brand, helping us to promote Oman as a key destination with first class hospitality and a rich culture and heritage. We are delighted to once again be working with him as part of our wider efforts to invest in the future of our nation.”

Speaking on behalf of the National Bank of Oman, John Chang said: “We are delighted to be continuing our partnership with Ahmad Al Harthy and Oman Racing and we look forward to seeing the team achieve even more success in the future. Supporting the Sultanate’s sporting community has always been a strategic objective of NBO, and it is an honour to have an ambassador who promotes the same values of corporate citizenship and responsibility that we encourage.”

Omantel, the leading supporter of sports in Oman, extended its support to Ahmad in 2016. Hamdan Moosa Al Harasi, Acting Vice President Corporate Strategy at Omantel, said the continuation of the renewed partnership is key to Omantel’s strategy of supporting Omani talents.

He commented: “Our company prides itself on supporting the youth of Oman and sports in the Sultanate. We believe our sponsorship of Ahmad is key to achieving those objectives as we share the same passion for performance, excellence and the highest standards.”

Property development Barr Al Jissah, which first supported Ahmad last year, extends its support into 2017 and Firas Matraji, CEO of Barr Al Jissah, commented: “Not only are we very proud to be the host venue for today’s launch of Oman Racing’s new motor racing programme, Barr Al Jissah is delighted to be supporting Ahmad’s challenge again this year and making the most of those links to promote all Oman has to offer.”

On behalf of brand new sponsor Amouage, CEO David Crickmore said: “At Amouage we are delighted to confirm our association with Ahmad Al Harthy for the 2017 endurance racing season. Everyone at Amouage is very much looking forward to seeing Ahmad in pole position to win the championship and we will be following him closely throughout the year. With standalone shops and quality retail partners across the globe, we are glad to be able to invite some of our clients to experience the excitement of motor racing first hand and to enjoy a day at the track with Amouage and Ahmad Al Harthy.”

Ahmad and Oman Racing will make their first ‘official’ appearance of the year during the pre-season Blancpain Endurance Cup test days at Paul Ricard in France on 13th/14th March. The championship gets underway one month later, over the weekend 22nd/23rd April at Monza in Italy.