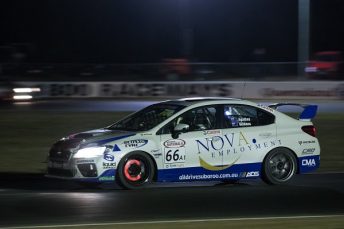 Dimitri Agathos and Lachlan Gibbons have declared themselves satisfied with the ongoing performance improvements in their FullGas Racing Subaru WRX STI after chalking up a pair of sixth-place finishes in Round 4 of the Australian Production Car Series at Queensland Raceway on the weekend.

“I concentrated on nailing a perfect lap, and felt I extracted the most from the car,” Agathos said.

“We outqualified a couple of cars we didn’t expect to, so we were happy with the outcome.

The first 300km race – the “Fight in the Night” – was held on Saturday evening, giving both drivers their first taste of racing in the dark.

Agathos started the race, pitting on lap 45 to hand the car to Gibbons and take on a full tank of fuel. Initially, the team had been hoping to execute a one-stop strategy but it soon became clear than an extra splash of fuel would be required; Gibbons pitted again during a Safety Car on lap 60 for a top-up.

After resuming at the tail of the field, Gibbons charged his way back to the pointy end, taking the chequered flag in sixth.

“We were conserving fuel as much as we could, but we soon worked out we needed to do two stops,” Gibbons said.

“Fortunately a Safety Car came out at a good time for us to make the extra stop without losing a lap.

“The night racing was a fun experience – there were stages where I couldn’t see much of the track but I was still able to feel where it was.”

Gibbons started Sunday afternoon’s second 300km race, holding down sixth position during the opening stint before pitting for a fuel top-up on lap 12.

“Once again, a Safety Car came at the right time for us to make our extra pit stop, so we took advantage of it,” Gibbons said.

Again finding himself at the rear of the field, Gibbons stormed back to seventh within a few laps of the restart; he remained in the car until pitting on lap 53 to hand over to Agathos for the run home. Agathos maintained the car’s sixth position through to the end in an uneventful final session.

“Overall, it was an excellent weekend and very pleasing to complete an event without any engine problems,” Agathos said.

“The All Drive Subaroo crew did a great job of rebuilding the engine – as well as solving the reliability issues, the new forged pistons have also significantly improved power and torque.

“It’s given us a lot of confidence ahead of the next round at Phillip Island, a track where the engine is placed under high load,” Agathos concluded.

NEXT ROUND: Phillip Island 4 Hour, 8-10 September