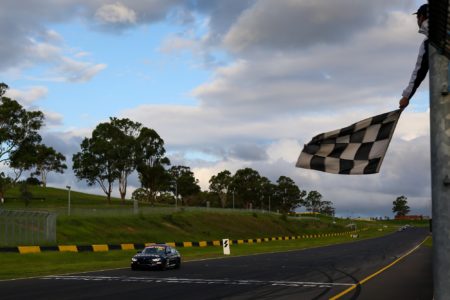 In a rain-affected race one, the FullGas Racing/Nova Employment Subaru WRX Sti shone with Agathos dominating the race despite an early excursion into the grass on the second corner before which he was already in the lead after having started sixth on the grid.

The next nearest APC competitor to Agathos was Cem Yucel in another wet weather weapon, the C1 class winning #40 Harding Performance Volkswagen Golf. Third outright in the national series and first in Class A1 was Tim Leahey in the #23 Bruce Lynton BM Service BMW M3. The #23 had struck trouble in qualifying with its traction control system, however the team elected to start the race from the rear of grid to have the maximum time possible to address the problem and that strategy paid off with the car on-song for the race.

Taking out victory for Class D and putting in a very impressive performance was James Keene in the #51 MWM Racing Mini, which was the fourth APC competitor home ahead of the Shane Smollen driven #56 Bruce Lynton BM Service BMW. In the A2 class, the Coleby Cowham CK Motorsport Mustang finished 7th in the APC standings and first in class A2 ahead of the Carr Motorsport BMW, which finished 12th in the outright APC standings.

“We were sitting on the dummy grid waiting to go out for the first race and it started raining, which for us definitely helped our changes for the race,” Agathos explained.

“I got a good start and got to the lead on the first corner, but then I made a pretty stupid mistake and ran off the track and came quite close to the wall.

“I re-joined in sixth or seventh and by the end of the first lap I was back up to third and then back into the lead. From there we just pulled away, calmed down and cruised home. It started drying out later, but we had enough of a lead to hold onto it.”

Race two rounded out a big day of Production Car Nationals action at Sydney Motorsport Park, with Beric Lynton taking over the driving duties of his #23 Bruce Lynton BM Service BMW M3 and overcoming issues to claim the outright victory and the entry’s second A1 class win of the day.

Lindsay Kearns was at the wheel of the #25 CK Motorsport for race two and had a real driving job on his hands with the Mustang becoming increasingly squirrely across the hour long race. He held on to bring home second outright and a second Class A2 victory ahead of third outright and dual-B1 winner, Agathos in the Subaru.

Fourth outright and again first in class C1 was the #40 Harding Performance Volkswagen Golf, this time with Iain Salteri at the wheel. Rounding out the top five was Iain Sherrin in the #1 Sherrin Rentals BMW M4 which continued to experience mysterious limp mode issues which first surfaced during race one, for which the #1 had started on pole with Grant Sherrin at the wheel. The #51 MWM Racing Mini took out another Class D victory, this time with Richard Luff at the wheel.

“It was a very successful day. The car was playing up before we went out (for race two) – I couldn’t get rid of the traction control and when I drove out it put itself in auto. When I got around to the start it was stuck in third gear and then first gear, but when I took off it had traction on and put itself in auto again,” Lynton said.

“When it got up to fourth I was able to tap it back to third and kick it back to manual and then it was on. In turn two the car didn’t’ stop under brakes so I ran wide and got back to sixth or seventh and had a good race following Sherrins and some others, just peeling them off one by one and taking my time.

“When we pitted we reset the car again and when we went out it had brought the traction control back again so the car wasn’t great. Under the Safety Car I stopped and reset it – unlike the old car where you could do it on the fly, with these cars you have to stop and I think the Sherrins did it too straight after me as they were having issue as well.

“The traction was still there and I was just driving around and then it went again! I don’t really know what is going on, so we have to work on that. There have been some rule changes I didn’t realise with boost as well s owe are not the quickest car in a straight line at the moment, but we will work on that and just keep picking away.”

A number of other racers also ran into trouble during race two. Duane West in the DWE Motorsport Holden VF GTS went into the wall with a suspected ABS failure shortly after his compulsory pit stop after having earlier run in the top three, bringing out the sole Safety Car. David Ayres was forced to bring the B1 #19 Sherrin Equipment BMW 135i into the garage with a broken exhaust clamp with 17 minutes to go and just ran out of time to return to the track. Meanwhile, John Carter in the #7 Happy Days Racing Holden Commodore retired with just eight minutes left on the clock with a broken drive shaft. All of these entrants plan to be back in action for race three Sunday morning.

Failing to take to the track today was the Osborne Motorsport Renault Megane, with the team withdrawing from the proceedings following a practice fire on Friday. Driver Colin Osborne was unhurt but the #31 entry was severely damaged.

NSW Production Touring Cars had two races today, the first held in conjunction with the APC competitors and the second a standalone race for their category only. In the first race, Matthew Holt (#65 Cavanagh Electrics HSV Clubsport R8) lead the way for the NSW competitors overall and in class A2 and crossed the finish line second on the road. Reece McIntosh (#87 German Performance Garage/APRVW Golf) was fifth on the road and first for class B1 – an impressive effort given this is his first ever competitive race event. Also taking out class wins in the NSW standings were Tom Muller (A1 – #77 Muller Motorsport BMW), Daniel D’Aquino (B2 – #91 DKD Projects Holden Commodore), John Fitzgerald (C – #140 On Track Motorsport BMW 130i) and Edan Thornburrow (D – #116 Sydney Property Car Toyota 86). In the second race, Holt again took out the overall and A2 class honours, while Muller, McIntosh and D’Aquino also went back-to-back with class wins in A1, B1 and B2 respectively. The D class win for race two went to Zach Loscialpo (#212 Toyota 86) and there was no finisher for class C.

All of Sunday’s action at Sydney Motorsport Park will be live-streamed by BlendLine TV on the MRF Tyres Australian Production Cars facebook page and website and also right here on Speedcafe.com

For more on the APC, please visit www.australianproductioncars.com.au or www.facebook.com/AustralianProductionCars