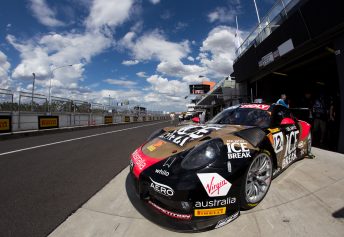 The AERO Paint survived a number of tests throughout the day, the car being involved in several on track skirmishes which resulted in four drive through penalties.

The AERO Paint finish on the front bumper of the car was barely scratched and although it had a number of close calls during the two days of practice and qualifying, any marks on the car were simply wiped away.

The application of AERO Advanced Paint Technology brought a new focus of innovation to Bathurst and created a great deal of interest among potential clients from the automotive and motor racing industries, as well as from those interested in using AERO Paint in marine and aviation applications.

It is more malleable than other signage options, lighter and easier to apply – a total of around nine hours was taken to fully apply the Ice Break, Virgin Australia livery to the Competition Motorsports Porsche.

AERO Paint is an American devised paint film technology that can have designs and logos embedded on it before being applied to a surface. It is lighter and more durable than vinyl, whilst also less susceptible to fading from the sun.

Through being lighter in a racing application, AERO Paint creates less drag, therefore provides performance advantages in fuel saving and tyre wear, which proved to be critical in Competition Motorsport’s results at the weekend.

In addition to finishing second overall, the Competition Motorsports Porsche won its Class A Pro-AM category.

Australian retailer of AERO Paint – Brett Rogers of BRMD.com.au said the product was overwhelmingly welcome in Australia and the future looks extremely bright for it in his market.

“AERO Advanced Paint Technology was incredibly well received at the Bathurst 12 Hour,” said Rogers. “The leadup to the event created a lot of interest in checking out the Ice Break, Virgin Australia Porsche, so regularly we were welcoming potential clients to the garage to view the application and its seamless embed process.

“A number of positive discussions about implementing the AERO Paint advantage were held across several industries, including motor racing, marine and aviation.

“For Competition Motorsport to get this result on debut for the product in Australia is a massive positive and I think gives us a wonderful platform to forge ahead in the future.”

More about AERO Advanced Paint Technology can be found at www.brmd.com.au or www.rethinkpaint.com.