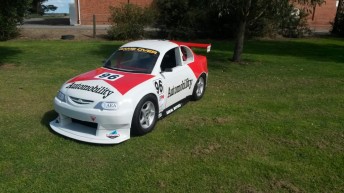 To celebrate the 30th Anniversary of Peter Brock’s 1984 Bathurst 1000 win, Advantage Motorsports Jeff Watters is competing in the Aussie Racing Car round at this years Bathurst 1000 with his Commodore sporting a new livery inspired by the car that Brock drove to victory.

The new look has got the nod from Brock’s brother Phil – a friend and former fellow competitor from Watters’ Commodore Cup days.

There is also another link between Watters and Brock- they shared the podium at the Bathurst 12 Hr in 2003.

This years Bathurst 1000 will be a return for the Aussie Racing Cars to the mountain, with an expected grid of approximately 50 of the pocket rockets to compete in 3 days of racing.

Watters team mate Chris Stevenson will have his third run at the mountain in his Hertz Rentals/Aerial Motors Commodore.

A number of competitors will have their first run at Mount Panorama at this meeting- and all involved are looking forward to the action packed racing that Aussie Racing Cars always puts on.

In a similar vein to the Brock livery, Shane Smith will be running at DJR inspired livery on his Falcon.

The next 6 weeks will be very busy for the Aussie Racing Car competitors, with Bathurst and the Gold Coast non championship round only 2 weeks apart and the final round held at Phillip Island 3 weeks later-so all the crews are hoping for exciting racing but a damage free meeting at the mountain.