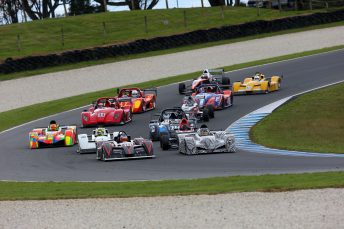 MEDIA RELEASE: West will open its doors to the public in Adelaide

Adelaide’s own West Motorsport Australia will fling open its doors this weekend (Sunday 5 February, 2017), offering a rare opportunity for the public to get an insight into a racing car manufacturing facility.

Established in 2005, West Motorsport Australia is Australia’s only designer, developer and manufacturer of high performance race cars for a global market. A race car engineering company and producer of the West LMP4 and DSR/CSR/C6SR world-leading Sports Racers, West is also the sole APAC Asia Pacific distributor of the Firman RFR F1000.

The most well-known home for West’s racing machines is the Australian Sports Racer Series – a national racing series which hosts fast-paced and entertaining racing across five national circuit racing events in three states of Australia. Even those not at the track can enjoy the action, thanks to the fact that all the action is streamed live and free online on event Sundays, while a post-produced television package is available after each event.

Now, as West prepares for the ASRS season-opener (April 7-9 at Sandown Raceway), the doors to its high-tech facility will be opened to anyone interested in finding out more – team members, pit crew, new drivers interested in leasing or driving West cars, and members of the public are all welcome.

From 12.00noon on Sunday the 5th of February, attendees will be able to see and experience the first-class facilities of West Motorsport Australia, enjoy a sausage sizzle and get up close and personal with the race cars – including the revolutionary LMP4, the Firman and original West models the WX1000 and WX10. They will also be able to chat with the mechanical and engineering team, as well as West’s head of operations Mr Lionel (Leo) Lefebvre – who is visiting specially from West’s production company in Thailand.

“We are very excited to welcome everyone to West this Sunday, it is sure to be a great day,” West Race Cars Chief Executive Officer and Managing Director, Allan Branch, said.

“Never before has there been the chance for members of the public to visit our facility in this style and get closely involved with our cars and our staff, and Leo being here is very special indeed.

“An impressively-credentialed international racing driver originally from France, Leo runs our operations in Thailand, has been a celebrity driver in feature films, raced in Europe and Asia, and has a resume many drivers would dream about – no one knows more about our cars than Leo.

“I can also confirm that Leo is planning on driving our new LMP4 model in the Australian Sports Racer Series in 2017 – adding Down Under to his extensive driving resume.

“If you can come down on Sunday, I highly recommend you do – it will be a fun and informative day out for all racing enthusiasts.”