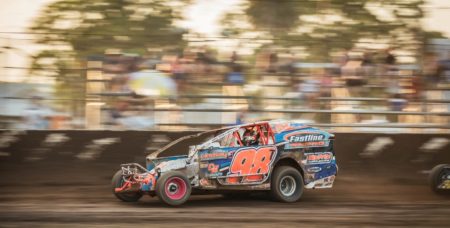 After last month’s previous race meeting was forced to be cancelled due to wet weather, the Hession’s Auto Parts Grafton Speedway is set to return to action this Saturday night with a hot field of classes ready to put on a show for race fans.

Headlining the action is the V8 Dirt Modifieds and there is no doubt the action from the class will be fast and furious. In what is going to be their first Grafton Speedway appearance since early January’s NSW Title, the class has a solid field assembled with the likes of reigning 5 Star Dirt Series Champion Chris Corbett, veteran Ray Eggins, Marley Weller, Queenslander Trevor Wiley, and local front-runners Andrew Firth and Christopher Polsen.

Apart from the V8 Dirt Modifieds, the program is set to feature the 40-lap Frank Inman Memorial for the Wingless Sprint class. This event, which is proudly sponsored by Campbell Wrecking, has attracted a solid field of cars with Jacob Jolley, Mason Cattell and Scott Marsh likely to set the pace. Following the Frank Inman Memorial forced to be postponed following the previous race meeting’s rain out, this event will be the first appearance of the season for the class at Grafton Speedway.

Making their 2019-20 season debut at Grafton Speedway is the Microsprint class. Hosting the second round of the Triple Crown Series, the racing is sure to be hotly contested around the Grafton Speedway track with opening round winner and multiple Australian Champion Mitch Isaacs, along with Isaac’s two sons Jackson and Lachlan, and two other former Australian Champions in Les Nelson and Ernie Havas set to be at the pointy end of the field.

Grafton Speedway would like to thank Hession’s Auto Parts for their support throughout the 2019-20 season. Based in Grafton, along with their new store location in nearby Coffs Harbour, Hession’s Auto Parts stock a wide range of parts and accessories at competitive prices.