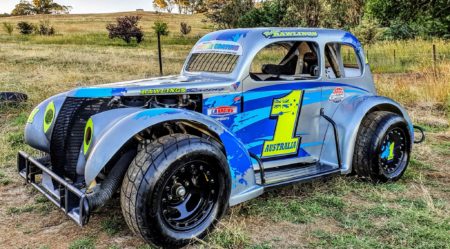 After a break of nearly two years, Leeton’s Brobenah Raceway is going to serve up the Riverina region with speedway action this Saturday night, and this is going to be headlined by the Long Track Classic for Super Sedans and the Australian Title for Legend Cars.

A wide range of drivers from all around the country are set to converge on Brobenah Raceway to light up their massive 940-metre track. Brobenah Raceway is regarded as both the longest and fastest track in Australian speedway.

The annual Long Track Classic, which is sponsored by De Paoli Transport, is one of the blue-ribbon events on the Brobenah Raceway calendar, and it is going to be headlined by multiple Australian Super Sedan Champion Callum Harper. The Harper family has a long association with the Brobenah Raceway track and make the effort to contest the Long Track Classic event by travelling from their home base of Tasmania.

As a former Long Track Classic winner, Harper heads into this Saturday night’s event as the favourite, but he is sure to be challenged by the likes of newly crowned Victorian Champion Mick Nicola Jnr, three-time Australian Champion Mick Nicola Snr, and multiple Victorian Champion Lucas Roberts. Other drivers in the field are going to be Jamie Collins (Vic), Andrew White (NSW), the Kranitis father and son duo Paul and Kurt (NSW), David Brown (NSW), and Paul Tindal (Vic). The latter is set to drive for local car owner Wayne Aylett.

In the JL Diesel Repairs supported Australian Legend Cars Title, defending champion Rob Rawlings Jnr is aiming to make it back-to-back wins, but the Canberra, ACT based racer is certainly not going to have it all his own way. Those amongst the biggest challengers to Rawlings Jnr’s hopes include the likes of current NSW and Victorian Champion Troy Bolton and last season’s Australian Title runner-up John Egan. Both Bolton and Egan finished on the podium in last season’s Australian Title in minor positions, so they are aiming to make it to the top step of the podium. Amongst the list of entrants are Queensland challengers Matt Gordon and Ian Jones.

Heading the support class list are the Modified Sedans, which is supported by Hygienic Pipeline Solutions, in what will be their Brobenah Raceway debut with the exciting Victorian-based Atkins brothers Brock and Todd leading the way. Making up the support class field are the GOSA Sedans and RSA Limited Sedans.

The action is set to begin at 4pm.

For further information about Brobenah Raceway, you can FOLLOW them on Facebook by searching Leeton Motor Sports Club or contacting club president Ron Watts.