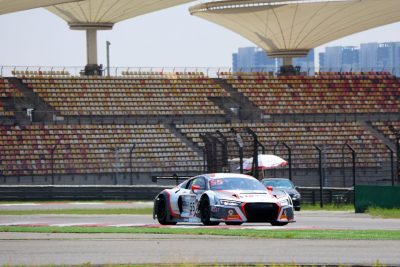 In a shortened weekend, EN Sport Motors by Absolute Racing’s Vincent Floirendo and Adderly Fong secured third position and the final step on the podium in Round 3 of the GT Masters Asia at Shanghai International Circuit, China.

While the podium position is a solid result, the team were left wanting for more as Sunday’s Round 4 has been cancelled due to the threat from a typhoon after a promising qualifying session from the two Absolute Racing-run Audi R8 LMS.

As per series regulations Am drivers take charge of qualifying duties. Therefore Bhurit Bhirombhakdi was handed the qualifying for the #59 Singha Plan B by Absolute Racing entry. On Saturday, Bhirombhakdi’s best lap put him fourth on the grid carrying 50kg of success ballast from the previous event in Ningbo.

Team-mate Kantasak Kusiri took the first stint ahead of the mandatory pit stop and driver-change, making up ground from the outset to run in a fine second position overall before handing over to Bhurit. The Audi Sport R8 LMS Cup race winner saw himself in the tough and thankless position to share the track with the pro drivers in the most ballasted car. He lost three places, crossing the finish line in fifth.

Round 3 qualifying session saw Floirendo recording the sixth fastest time, and he duly took the start of the one-hour event. The Filipino driver made a clean start and kept the #55 EN Sport Motors by Absolute Racing Audi R8 LMS position safe without losing too much ground on the top-runners. Fong took over at the half-distance mark in sixth position, passing three opponents over his stint and then gaining the final step on the podium, recording the fastest lap time in the process.

Wet conditions during Sunday’s morning qualifying session saw Bhirombhakdi scoring third place on the grid. On the other side of the garage, Floirendo factored into the top four in the latter stages of the 15-minute session, but this splendid effort has unfortunately been in vain.

The afternoon’s race was cancelled due to a typhoon that was set to hit Shanghai on Sunday.

Team Manager Michael Schneider, said “Yesterday’s race showed us a stunning performance from Vincent Floirendo and Adderly Fong, taking home a podium position. Bhurit Bhirombhakdi and Kantasak Kusiri had to carry the 50 kg handicap ballast for their victory in the last race but still managed to finish fifth. We had very good starting positions and expected a lot from Sunday’s race, but unfortunately it got cancelled.”

Team Director Ingo Matter added, “We made no secret of the fact that this race was not going to be easy for us as the opposition put a lot of effort in this race. Ultimately our pace was good enough and we got a much-deserved podium with EN Sport Motors by Absolute Racing’s R8. By contrast, Singha Plan B by Absolute Racing car was carrying the maximum possible ballast in race one and running on a different strategy from the rest of the field this weekend, saving the best set of tires for today (Round 4). It is a pity we couldn’t show our pace on race two; but we have other races ahead of us.”

GT Masters Asia returns in January for the last event of the 2018/2019 season at the Sepang International Circuit, Malaysia.