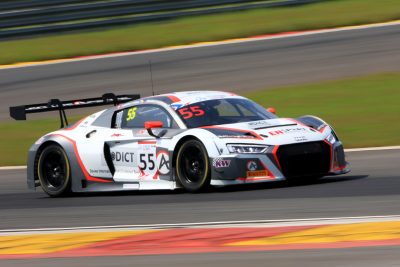 This weekend marks the second round of the 2018 GT Masters Asia, where two Absolute Racing Audi R8 LMS serviced teams are keenly wait to compete in the team’s home event, aiming top tier results in front of the passionate Chinese crowd.

Following a race win at the GT Asia Series opening round at Sepang, Bhurit Bhrombhakdi and Kantasak Kusiri stormed to an outstanding double victory in the GT Masters Asia season-opener Ningbo International Speedpark. The #59 Singha Plan-B Motorsport by Absolute Racing duo sit in a comfortable first place in the standings, and will be aiming to return to the podium this weekend.

The Chinese Formula One Grand Prix venue, with sweeping curves and long straights, offers a totally different scenario to the Ningbo circuit, which played host to the opening event. Vincent Floirendo and Adderly Fong will share again the driving duties in the #55 EN Sports by Absolute Racing Audi R8 LMS, hoping to improve on their GT Asia Series Round 2 third-place finish.

Drivers are set to experience intense heat of Shanghai’s summer over the weekend and face a stronger competition from the local entries. But after the speed, consistency and racecraft displayed by each driver in the previous rounds combined with a clever race strategy and well-executed pit-stops, the Ingo Matter and Fabien Fior led team are intent on achieving more silverware.

Michael Schneider Team Manager of Absolute Racing’s GT Masters Asia squad, commented, “We will face very hot conditions this week in Shanghai. That will make the weekend extremely exhausting and hard for our drivers and crew, but I’m sure they will keep their focus. We are aiming for another podium finish at our home track.”

Team Director Ingo Matter added, “It is always great to race at Shanghai. It is our home turf and a circuit that we have had plenty of success before. We are ready for the challenge. Our drivers are ready to keep the momentum going but this time the GT Masters Asia competition will be very strong with some serious factory backed teams intending to hunt us down.”

Launched in 2017, the GT Masters Asia has grown quickly to become a firmly established part of the region motorsport landscape. The championship races at some of the most prestigious racetracks in Asia, including the Formula One circuits of Shanghai and Sepang, and enjoys one of the widest variety of GT car grids in the continent.