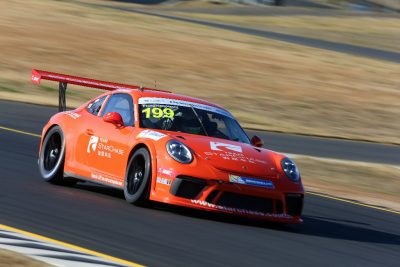 Team StarChase’s Philip Hamprecht posted the third-fastest time during qualifying. As the second best qualifying time determines the grid for the second race of the weekend, the German youngster placed his car second on the grid for race two while AAS Motorsport by Absolute Racing’s Maxime Jousse lined up third for the Round 7.

Various grid penalties mixed up the starting order for race one, with Jousse and Sathienthirakul being promoted to fourth and fifth respectively.

The two-day event culminated in a spectator-focused Saturday with four races on the schedule.

In the opening race of the day, Hamprecht has clinched another podium place in the series. Lining up from third on the grid, the German youngster moved to second at the start but could not keep at bay his title rival, who was taking the advantage of using new tires, in the final laps, so he had to content with third.

Also noted was the performance of est cola PTT’s Tanart Sathienthirakul. Starting from fifth, Sathienthirakul made progress immediately on the track and gained one position to finish fourth overall, registering his career best result in the championship where he debuted in 2017.

Further back in the field, Bao Jin Long claimed his third Pro-Am class win of the year, holding the early edge on a four-car battle for first. Zheng Tong Auto driver crossed the finish line in 9th Overall.
The best was saved to Saturday afternoon, with Hamprecht leading a superb 1-2 finish for Absolute Racing serviced teams in Round 7.

Team StarChase driver got off to a flying start from second on the grid, taking the lead, and immediately put his head down to open up a nearly two second gap after the early Safety-Car period. The 20-year-old German ace led from start to finish to win in emphatic style. Hamprecht claimed his fourth win of the season, collecting gold in the Porsche Dealer Trophy again, closing the distance to the front to 11 points in the Overall standings. Team StarChase enjoys a 26-point comfortable lead over the second-place in the Porsche Dealer Trophy’s classification.

Jousse crossed the finish line in second place behind Hamprech to complete the second one-two for #AbsoluteRacing serviced teams this season in the Carrera Cup Asia. The Frenchman, who also made a outstanding start from third on the grid, was on an epic three-car fight for the second place that he’d win in the end. With this weekend results Jousse lies now fourth in the drivers’ championship standings.

Sathienthirakul had been blocked at the start and got stuck behind a slower car the whole race. The Thailand driver came home seventh this time, scoring valuable points that allowed him to move up to ninth in the standings.

Starting from eight on the grid, Yuan Bo overshoot the second corner in the opening lap, losing two places that way. Porsche Shanghai Waigaoqiao & Pudong racer made a comeback to finish eighth overall.

Daniel Lu Wen Long had a tumultuous start to the race too. The 17-year-old Chinese driver was pushed into spin by a competitor in turn two, spun and then was hit by another opponent. Eventually he managed to bring the Porsche China Junior’s 911 GT3 Cup from the very back of the field to 12th.

Bao Jin Long led most of the race in the Pro-Am class win of the year, but the Zheng Tong Auto driver slipped back to third in the last lap. The Chinese driver is currently second in the class with 135 points, just two points adrift from the top spot.

Team Director, Fabien Fior said, “I am very happy with the outcome of the weekend here in Australia. We were able to make the very most of our opportunities, right across all the teams. We secured the fourth Overall win of the season, and we celebrated another victory in the Pro-Am class. We closed the gap to our opponents Overall and in the Pro-Am class, and we placed all our six drivers in top-nine in race one. I would like to pay a huge compliment to the entire team as we leave for summer break with a positive feeling. It was important for us to finish top going into the second part of the season.”

Once the summer break is out of the way, the championship will be into the season highlight at Marina Bay Street Circuit (Singapore) on September 14-16.

Zheng Tong Auto’s Bao Jin Long was the best of the pack from the Asian region in the Pro-Am invitational, finishing third overall under the lights of Sydney Motorsport Park.

Maxime Jousse was the best of the Absolute Racing-run cars in the Pro drivers’ showcase, rounding out the top-ten. Sathienthirakul finished 14th, one place ahead of Hamprecht. Yuan Bo was P17, while Daniel Lu did not finish.

By taking part in this non-championship race the Absolute Racing serviced teams’ drivers were awarded 10 championship points for the Overall and Pro-Am Class classifications.