Absolute Racing set to challenge for titles in season finale

Absolute Racing set to challenge for titles in season finale 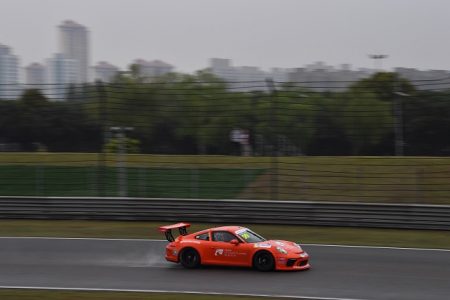 Absolute Racing is looking to carry its good form into the Porsche Carrera Cup Asia (PCCA) title decider this weekend (16/17 November) at the Shanghai International Circuit, where the exciting Pro and Pro-Am classes chase draws to a fitting conclusion in the two remaining rounds.

With 43 points up for grabs, Philip Hamprecht will need to dig deep from second in the championship standings to take the 2018 title in his No. 99 Team StarChase Porsche 911 GT3 Cup. In a championship so competitive that finishing out of the points just once can put pay to title aspirations, Hamprecht’s DNF in the first race at Bangsaen in July represented a massive blow in what has otherwise been a strong season.

The German youngster heads to the season finale in second on 176 points; 19 points behind championship leader Chris Van der Drift. Team StarChase will defend the first position in the Porsche Dealer Trophy.

This weekend the frontrunners will have to pay attention to Tanart Sathienthirakul, in ambush, who is on top form in the latter part of the season. He proved this with a strong second place on Saturday race in Malaysia. The east Cola PTT driver currently sits sixth in the standings, and will be competing for the last place in the top-five.

The Porsche China Junior driver Daniel Lu Wenlong lies eighth on the leaderboard and has impressed this season with not only his ability to learn quickly, but also the maturity he is displaying under pressure. For Lu, Shanghai is his home track and he should be up on the speed again.

On the other side of the garage, the whole Porsche Shanghai Waigaoqiao & Pudong is looking forward to their home round. Lying ninth in the standings, Yuan Bo will be keen to shine in front of their audience, aiming to get back on top form after a solid performance last round at Sepang.

Bao Jin Long driver heads home with a 15-point lead in the Pro-Am category’s championship standing. The Zheng Tong Auto driver has three class wins and six podium finishes under his belt so far this season, and is gunning for his first Carrera Cup Asia title.

Team Director Fabior Fior said, “It’s been a good season all in all; to be second Overall and leading the Pro-Am class going into the final round shows it. We want to be winning it in both classes, but we’re up against some seriously strong competition. Whatever the outcome from the weekend, one thing is for sure; the Absolute Racing-run teams will be going all out for home track glory.”