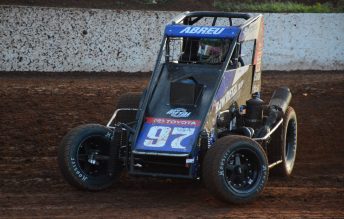 Abreu qualified on pole position for the 40-lap feature race presented by Speedcars Australia and took command of the race from the outset, seeing off an initial challenge from Zach Daum and then withstanding a late race surge from fellow statesider Brady Bacon to secure victory.

An American trifecta looked to be on the cards until Daum exited on lap 28, enabling preliminary feature winner Nathan Smee to snare the final spot on the podium.

In a remarkable run through the field, Scott Farmer somehow secured fourth ahead of New Zealander Chris Gwilliam and Brock Dean, with Reid Mackay, Jason Bell, Kaiden Brown and Rodney Harders rounding out the top ten. 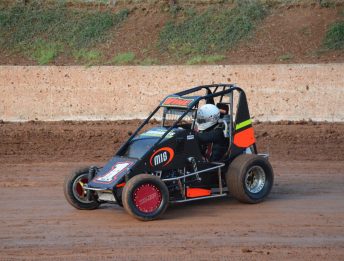 On the same program, Darren Vine maintained his stranglehold on the Australian Compact Speedcar Championship, taking maximum advantage of the turbo-charged power at his disposal to score a comfortable win in in the 30-lap championship final.

Robbie Stewart settled into second early and faced little threat for his position once Wayne Corbett exited on lap nine after shedding a wheel.

As a spectacle, all of the action came courtesy of the battle for third as Nathan Mathers kept Victorian champion Justin Paull and Mark Heaton at bay to secure third and ensure a Queensland trifecta.

Starting the weekend with only 22 cars, a few absentees on the second night resulted in just 17 cars facing the starter in the championship final, only ten of whom made it to the chequer, with Jim Kennedy, Mitchell Rooke, Nick Gannon, James Barton and Dave Swan completing the finishers.

Having finished the opening night as top poinstcorer, Daum consolidated his position in the opening heat of the night when he downed Singleton and Dallas Sharp.

Heat eleven saw the locals prevail with Rodney Harders leading home Young and Dean, while the final heat proved an emphatic win for Abreu over Mackay and Gwilliam.

In the pole shootout, Abreu advanced from the bronze round and then took out the silver showdown before completing his climb up the order when he outpaced Daum in the gold shootout to secure pole position, the two Americans outpacing Smee and Jenkins by half a second.

At the drop of the green to get the feature underway, Abreu shot to the front ahead of Smee, who had slipped ahead of Daum.

The two highest qualifiers amongst the locals in Doyle and Young had their race end after just one lap when they tangled in turn four, taking Palmer with them to the infield.

Back underway, Daum pounced to usurp Smee and set off in pursuit of Abreu while, back in the pack, Bacon was riding the cushion in his forward charge, rounding up the likes of Matt Smith and Gwilliam on his surge to the front.

Bacon deposed Smee on lap 12 and then relegated Daum on lap 25, only for the latter to reclaim the position momentarily before grinding to a halt in turn two and retiring.

Further back, Jenkins found a way past Smee to secure what would have been third until he too headed infield, leaving it to Smee to try and reel in the American duo.

Bacon made significant inroads on Abreu, but was unable to wrest the lead, while Smee couldn’t repeat his Friday night heroics and had to be content with third place.

Compact Speedcar heat wins went to Justin Paull, Barry Gibbes and Corbett, who would start on the front row of the feature race alongside Stewart.

However, Vine had made his way to the front after just five laps and that was, as they say, all she wrote as he cleared away to secure win without anybody getting close enough to mount a serious bid for the top spot.

The biggest incident of the night came when Mark Maczek rode out a wild ride in the main straight, but nothing was going to prevent Vine from clocking yet another win.

Modlite heat wins went to Klinton Hancey, Ben Walker and Trent McClean, but it was Chris Ruane who proved too pacey in the feature event, leading home Hancey, Sean Butcher, McClean and Will Butler.

Ben Robertson won the Open Sedan B feature and then Wayne Kirkman pounced late in the race to take out the Open Sedan A feature when Ray Lane suffered a flat tyre whilst in control of the race.

The mighty Midgets return to Ausdeck Patios Archerfield Speedway on February 3 and 4 for the Kratzmann’s Caravans Australian Midget Championship featuring more Americans, more New Zealanders and all of the best drivers from across Australia.