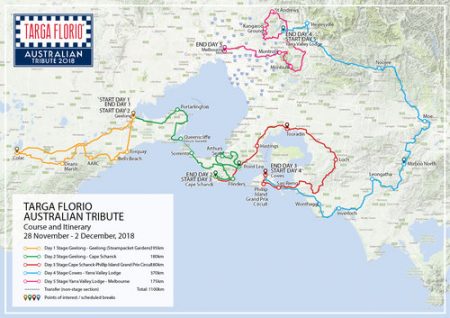 More than one hundred iconic classic will converge on some of regional Victoria’s stunning scenic driving roads for the Targa Florio Australian Tribute, from today 28 November to 2 December.

The Targa Florio Australian Tribute is a regularity event for much loved classic cars produced between 1907 and 1976, where competitors drive each section of a course in a specified time at specified average speed.

Last year was the 101st anniversary of the Targa Florio and the first time the event had been held outside of Italy where the event was founded.

The Australian Auto-Sport Alliance (AASA) has been contracted as the sanctioning body for this event.

Benalla Auto Club CEO Chris Lewis-Williams says it’s an event the AASA is proud to be the sanctioning partner for.

“We reached out to the team at Targa Florio after hearing they were having issues with having the 2018 event sanctioned,” Mr Chris Lewis-Williams said .

“With our experience with the closed road rallies promoted by Mountain Motorsports, for the AASA Australian Tarmac Rally Championship – I was confident that the AASA would be able to put together the package that would allow the event to run.

“I’m really looking forward to spending some time around the event and meeting the competitors. I am also a ‘car guy’ and can’t wait to admire the awesome collection of cars during the event.”

Competitors from the United Kingdom, Italy, Hong Kong, Singapore and the USA will join home grown entrants in three categories:

Chairman Angelo Pizzuto is among those participating in the event with champion regularity co-driver and leading journalist with Germany’s Ruoteclassiche Magazine, Himara Bottini.

“We can’t wait to return to the roads of Victoria and the Targa Florio Australian Tribute,” Mr Pizzuto said.

“The event is quickly building into a world class event. One that is growing the Targa Florio brand and an event that we are very proud of. The event is the perfect end to my rallying year.”