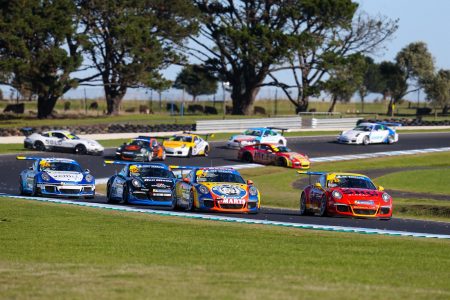 Vidau dominated qualifying again to take his third-straight GT3CC pole by three-tenths of a second over his Sonic team mate. The 17 year old South Australian went on to win Race 1 by half a second after a close battle with Love and Harri Jones, as all three shared the lead throughout the eight lap encounter, with Love placing third.

Race 2, the 26-lap Jim Richards Trophy Endurance Race produced another thrilling battle between the top three, as Aaron Love scored his maiden Cup Challenge race victory over Jones. Vidau survived a high-speed off at Turn 4 after coming up on lapped traffic, dropping back to sixth before he recovered to third.

Vidau jumped to second off the start and launched wave after wave of attack on Love for the lead in Race 3, but Love hung on to score a lights-to-flag win. Vidau dropped to third after battling to fend off Jones late in the race.

The next round of the Porsche GT3 Cup Challenge will be held at Queensland Raceway on August 2-4.

“The team at Sonic Motor Racing Services have done an awesome job this weekend preparing a quick car and coaching me along when I got nervous in the lead,” said Love.

“Race 2 was great, I sat back and let the race come to us and after a hard-fought race with Max and Harri I moved to the lead at Turn 2 and held on for the win.

“Race 3 was all about making a good start and not making any mistakes and let the guys behind fight which gave us a comfortable gap by the end.

“We know we’ve got the speed to do well so hopefully we can continue this form to Round 3 at Queensland Raceway.”

“We had awesome pace all weekend as we always do, Sonic gave me a great car but I couldn’t quite get the job done in Races 2 and 3,” said Vidau.

“I was lacking a bit off the start and the racing in this series is so aggressive that it makes passing around this track so tough, but we’ll come back stronger at Queensland Raceway.”

“We killed the rear tyres battling early in Race 3, but we still had the speed over the cars in front so it bodes well for the rest of the season.”

“It’s only my third or fourth time here, so I’m pretty wrapped with the result,” said Williams.

“We started slow in Practice on Friday, but I was stoked to get my best Qualifying result ever with fifth in class.

“I improved again in Race 1 to get my first podium result in third.

“Race 2 was a race but I spun coming over Lukey Heights and survived that which was good, and Race 3 was great to get back to fifth.”

“I finished fifth overall for the weekend which is my best finish ever, so i’m really thankful to everyone at Sonic Motor Racing Services for a great weekend.”