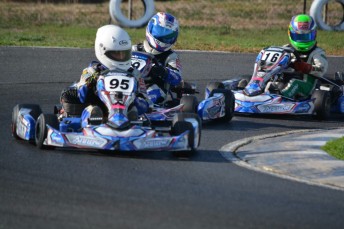 Aaron Cameron has turned the karting and motorsport world on its head in the past 12 months and has continued his hot form into 2015 by confirming his European debut in 2015.

Cameron will take to the international stage in round three of the super masters series at the famous La Conca circuit in Italy. Cameron will be taking place in the ultra-competitive KFJ class being full of confidence.

“ It’s going to be a great feeling and huge challenge to step onto the international karting stage with some of the best karters in the world. To race at the famous La Conca circuit will be a dream come true.”

Cameron’s Australian Karting Championship assault has taken on a big positive as Cameron broke today the relationship and backing from DPE Kart Technology for the 2015 season continuing their relationship from 2014.

“It’s great to continue the partnership with DPE in 2015. They helped me win my maiden CIK State Championship in 2014 and I believe with the backing of the team I will be at my strongest going in for maiden national championship.”

Cameron’s opening round of the Australian Kart Championship will take place on the 3rd, 4th and 5th of April at the Go Kart Club of Victoria.

Geelong Kart Club in the Junior Clubman class. Cameron spoke about lacking a little bit of pace at crucial times but was very happy with a fourth place finish and to get some great points coming out of the opening round.

“We didn’t quite have the pace to go with the front guys this weekend, with limited practice and a bad start in heat 1 a fourth place finish for us in the final was a great result and a great points banker for us in our championship assault.”

Cameron will take on round 2 of the Victorian State Series at the Go Kart Club of Victoria on the 17th, 18th and 19th of April.