A weekend of consolidation

A weekend of consolidation 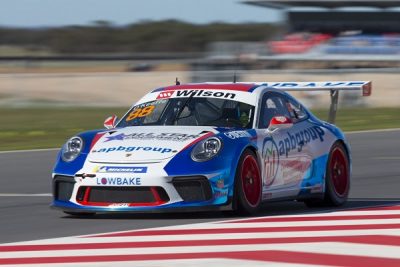 Dylan O’Keeffe has preserved his top-two position in the Porsche Wilson Security Carrera Cup Australia by finishing sixth overall at Tailem Bend on the weekend.

After qualifying eighth, the APB Group driver resisted pressure early in Race 1 to maintain his position, before taking advantage of the car’s tyre conservation to overtake three cars in the second half of the 20-lap race, finishing in fifth.

In Race 2, O’Keeffe again finished fifth after battling Jordan Love and Dale Wood, but in Race 3 he fell back a couple of places, taking the chequered flag in seventh.

While the APB Group driver admitted he didn’t have the pace of previous rounds, he said it was a positive outcome to finish the weekend with a healthy points haul.

“We had good consistency throughout the weekend, which worked to our advantage in the long first race, but we didn’t quite have the outright pace to challenge for a top-three position in qualifying or the shorter sprint races,” O’Keeffe said.

“The Tailem Bend circuit proved a tricky one to master with car setup and driving technique, and I’ll admit we didn’t get on top of it as well as some other drivers and teams.

“In terms of the championship, it was important that we still did the best job we could and banked valuable points, but clearly we have some work to do before the final two rounds at Bathurst and the Gold Coast.

“Sixth place for the round is actually our worst overall result for the year, so when I look at it like that it’s not too bad.”