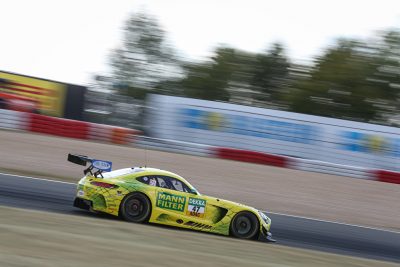 The MANN-FILTER Team HTP Motorsport team enjoys a successful ADAC GT Masters season half-time: in the first race at the Nürburgring, Maximilian Buhk (GER) and Indy Dontje (NED) came out on top with the #48 Mercedes-AMG GT3 and thus secured the team’s second win of the season. During the scorching weekend in the Eifel, Maximilian Götz (GER) and Markus Pommer (GER) scored a pair of podium finishes with the sister car: third place in the race on Saturday and second place in the race on Sunday. With these results, the duo has now also moved up to second place in the ADAC GT Masters drivers’ standings.

This weekend, the seventh and eighth race at the Nürburgring marked the half-time point of the 2018 ADAC GT Masters season. After the one month’s summer break, the teams with the Mercedes-AMG GT3 already showed a strong performance prior to the two races: Saturday’s first qualifying saw Nicolai Sylvest (DEN) with the #20 (Team Zakspeed BKK Mobil Oil Racing), Indy Dontje (NED) with the #48 (MANN-FILTER Team HTP Motorsport) and Luca Stolz with the #21(Team Zakspeed BKK Mobil Oil Racing) lock out first to third place on the grid.

The race on Saturday got underway with a turbulent start during which Sylvest initially lost the lead. A five second’s time penalty for the leading car then brought the Dane back on top with Indy Dontje behind the wheel of the #48 car following closely in his slipstream. The driver changes from Dontje to Maximilian Buhk (GER) and from Sylvest to Kim Luis Schramm (GER) shortly thereafter resulted into a temporary change in the lead. In a thrilling final part, Buhk put the race leader under increasing pressure and eventually overtook his fellow AMG driver. With a margin of almost six seconds, the German then safely brought first place home and thus secured the team’s second victory of the season. Schramm, in turn, had bad luck: on his way to completing the 1-2 for Mercedes-AMG, he had to retire following a collision in which he was innocently punted into the gravel trap. As a result of the post-race time penalty for the erstwhile second-placed Audi, Maximilian Götz and Markus Pommer with the #48 MANN-FILTER Team HTP Motorsport car still made it onto the podium as they were classified third. Sebastian Asch and Luca Stolz (both GER) ended up third in the junior classification with the #21 Mercedes-AMG GT3 of the Zakspeed BKK Mobil Oil Racing team. In total, three Mercedes-AMG GT3s made it into the top five.

Qualified third, Maximilian Götz and Markus Pommer had the best grid position of the Mercedes-AMG GT3 drivers for the race on Sunday. The duo with the #47 MANN-FILTER Team HTP Motorsport entry were steadily on course for a podium finish throughout the entertaining sprint race. Just before the end of the 60 minutes’ duration, final driver Pommer then came to the fore with the decisive move. On the main straight going into the final lap, he overtook the second-placed car and maintained his position until the end. As a result, Götz and Pommer are now also in second place of the ADAC GT Masters drivers’ standings.

Indy Dontje, MANN-FILTER Team HTP Motorsport #48: “Initially, the race on Saturday was slightly difficult. I lost one position at the start, but then drove a good first stint. The team performed a super pit stop, after which Maximilian did everything right and brought victory home.”

Maximilian Buhk, MANN-FILTER Team HTP Motorsport #48: “As Kim Luis came out of the pits in front of me, I noticed that he was still needing a little bit of time to get to the right place. Then he ran slightly wide at the exit of turn five and I thought: Now, I have to get past, otherwise it will be difficult.”

Maximilian Götz, MANN-FILTER Team HTP Motorsport #47: “That was a super weekend with a pair of podium finishes for us. The race on Sunday in particular with Markus’s move on the final lap to claim first place was great. Now, we are in second place of the drivers’ standings and we are already looking forward to our next event at Zandvoort where we want to continue to attack. The track should suit us very well, too.”