Some ten rounds after his season-opening feature race success, Kevin Titman returned to victory lane at Ausdeck Archerfield Speedway on Saturday night (February 15), chasing down runaway leader Lachlan McHugh to win round eleven of the East Coast Logistics Sprintcar Track Championship. With McHugh relegated by race officials during a late restart, Aaron Kelly would find himself second at the chequer, with Mitchell Gee finishing third ahead of McHugh and Tim Farrell in a race the delivered some terrific racing in challenging conditions. 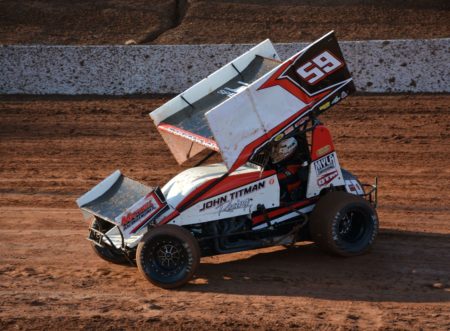 In round seven of the American Tire and Racing Services Midget Series, it was Charlie Brown who stood tall atop the podium after 25 gruelling laps, the last portion of which were spent in a spirited battle with the eventual runner-up in Rusty Whittaker. Under enormous pressure from both Callum Walker and Brock Dean, Matt O’Neill held firm to finish third in his best ever result.

With several late withdrawals, 20 cars hit the track for Sprintcar qualifying and the end result was quite remarkable when Kelly emerged with KRE Fast Time, stopping the clock at 12.075 to edge out Brent Kratzmann (12.076) by the merest possible margin. McHugh (12.136) was next best, followed by Gee (12.227), Farrell (12.234) and Karl Hoffmans (12,299), with Peter Campbell, Titman, Mitch Gowland and Mark Pholi rounding out the top ten.

Ryan McNamara had little difficulty in leading throughout the opening heat from pole position, finishing ahead of Nelson Reddacliff and Titman.

Heat two saw Butler home first in advance of Allan Woods and Kratzmann, while heat four saw Farrell execute a superb outside pass through turn four on the penultimate lap to round up Dan Murray and Adam Butler and steal the win.

McHugh was clinical in heat four, surging from the fourth row to assume the lead before a series of restarts in the final laps ultimately saw the race declared. The first moment came when Titman tipped over in turn four with two laps remaining, which was followed by a spin from Woods in the same spot before the race was finally abandoned when Woods halted proceedings again with a lap still to run. Despite another front row start, McNamara had to settle for second on this occasion, with Nicholas Whell snaring third.

As top qualifier into the Trax Tyre and Auto Dash, McHugh consolidated his position when he selected pole position in the pre-race grid draw before trouncing the field to finish more than two seconds clear of Kratzmann after six laps of racing. Kelly finished third ahead of Gee, Farrell and Titman, leaving McNamara and Butler to occupy the fourth row of the feature race grid.

From the moment the green flag flew, McHugh looked on track to recording an emphatic feature race win, clearing away from the field with ease and encountering little difficulty in dealing with lapped traffic, which came into play as early as lap five. Any hopes Kratzmann had of repeating his previous round success seemed to disappear as early as lap two when he launched onto the infield in turn two while running second and rejoined down the order. Gee assumed second at this point ahead of Kelly, who dropped a spot to Titman soon after. Just as McHugh was looking untouchable out front, Kratzmann spun to halt in turn four to trigger a restart. Titman wasted no time upon resumption, grabbing second from Gee before proceedings were halted again to remove a stricken Campbell from turn one. Seemingly devoid of the pace he possessed in the first half of the race, McHugh was unable to keep Titman at bay, the two making contact along the back straight as Titman emerged with the lead. It was a final restart on lap 26 after Kratzmann and Mark Pholi parked on the main straight that saw McHugh penalised two positions, kyboshing his victory aspirations as Titman led the final circulations to become only the third driver to score multiple Sprintcar feature race wins at Archerfield so far this season. Having moved ahead of Gee prior to the final restart, Kelly clinched second spot, with Gee third home from McHugh and Farrell, who finished with a flurry. McNamara and Butler were next best, followed by Hoffmans, Gowland, Whell and Kristy Bonsey, who advanced from 16th to finish ahead of Murray, Pholi, Reddacliff, Andrew Baumber, Rob Hamilton and Libby Ellis, leaving Kratzmann and Campbell as the only casualties.

In his first Midget race of the season, Walker was instantly on the pace for the opening heat, leading home Dean and Mitchell Rooke.

Heat two saw Brown chase down Brad Dawson and O’Neill before disappearing into the distance and then backed up to win easily again in heat three, this time over Scott Doyle and Reid Mackay.

However, the biggest winning margin of the night came in the final heat when O’Neill easily accounted for Audie Malt, Nathan Mathers and the rest.

Brown blasted away from pole position to lead the field away in the feature race, with O’Neill quickly moving ahead of Glenn Wright and the front row-starting Mathers. Having started deep in the field after failing to finish either of his heats, Whittaker was third after just five laps of racing and then moved ahead of Dean for second on lap ten. When Kody Stothard spun in turn four on lap 11, Brown found himself under pressure for the first time on the night, with Whittaker poised to pounce. The pass came on lap 13 but was short-lived because Brown surged back to the front on the next lap and then withstood everything Whittaker threw at him to score a hard earned success. Both O’Neill and Walker would round up Dean in the run to the chequer, with Whatmore putting in a mighty drive from the rear of the field to secure sixth. Mathers slipped to seventh by the fall of the chequer, with Wright, Dawson, Doyle, Mackay, Stothard and Malt completing the field.

Despite finishing second in his opening heat, a DNF in his next outing saw series leader Dave Eggins forced to negotiate the B Main, during which he encountered little resistance in taking the race ahead of Michael Butcher, who endured misfortunes in both of his heats.

Whilst the Harris namesakes maintained their positions at the head of the field for the duration of the feature race with Tim leading home Timothy, Jacob Jolley moved from the outside of row three to secure third ahead of Paul Robinson. In a mighty run that culminated with a fabulous fifth-place finish, Eggins surged through the field with Butcher in pursuit. Over the closing stages, Butcher found himself unable to keep pace with Eggins and ultimately finished eighth behind Brody Thomsen and Usher. Jayden O’Toole and Chris Catchpole completed the top ten ahead of Ian Milnes, Ben Hull, Lachie Robertson, Dave Ellis, Michael Lampard and Troy Carey, with Cleveland the final finisher.

Other than the demise of the two best presented cars in the field when Ethan Eyears and Tarhlea Apelt tipped over in separate incidents before a lap was completed, the Touch Ups Done Right Formula 500 feature race was rather unremarkable in its processional predictability. With Liam Williams starting from pole position after two heat wins, he skipped clear of the field and cruised home to defeat James Kennedy, who had won the other heat. Not surprisingly, most interest centred on the drive into third from Taylor Prosser in only his second outing since stepping up from the Junior ranks. Kristin Brown filled fourth ahead of Brock Thornton, Ronnie Barber, Brady Argles and Tomas Partington.

Following heat wins by Dave Fanning, Scott Jukes and Wayne Iacono, an inversion of the first two rows of the grid for the Stockmans Civil and Plant Lightning Sprint feature race put Darren Baldwin and Jim Kennedy at the front of the pack and it was the latter who launched from the outside to lead all 15 laps. Iacono finished second ahead of Keith Blatch who, having fallen to sixth at one stage and still running fifth at the start of the final lap, unleashed a last gasp outside pass, rounding up Scott Jukes and Baldwin to snatch the final spot on the podium. Adam Norton was sixth home, followed by Michael Gollagher, Kirsty Kelly, Jason Rae and Wayne Jukes.

Mickey Mitchell won both heats on his way to also taking the Ford vs Holden vs Sigma feature race. Maverick Dack finished in second spot and was followed to the flag by Terry Russell, Daniel Hillhouse, Jake Besgrove and Jesse Allen.

The next meeting at Ausdeck Archerfield Speedway is on February 29 featuring round 12 of the East Coast Logistics Sprintcar Track Championship, along with AMCA Nationals, Lightning Sprints, Compact Speedcars, Open Sedans, RSA Sedans and Formula 500 Juniors.