A royal performance by McHugh

A royal performance by McHugh 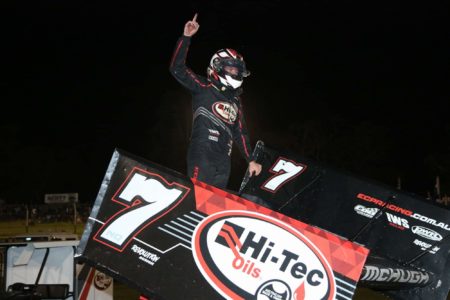 After totally dominating the Sprintcar scene in Queensland Lachlan McHugh continued his winning form in his first appearance in the Southern States for the 2020/21 season with an all the way in the 2021 Kings Challenge, which doubled as Round 2 of the Speedway Australia Sprintcar Super Series, at the Borderline Speedway at Mount Gambier. Due to his Gold Shootout win McHugh started on the pole and he was never headed as he put on a masterful display of driving, especially in the lapped traffic, as he captured his second consecutive victory in South Australia and his first at the Mount Gambier venue.

Following on from his recent A-Main victories at Bordertown and Murray Bridge Daniel Pestka continued his impressive form as he finished second with Marcus Dumesny completing the multi-state podium. Robbie Farr looked a lot more comfortable in the V88 as he finished fourth while Grant Anderson rounded out the top 5.

After transferring from the B-Main James McFadden grabbed the Hard Charger bonus points as he climbed his way to sixth while Brad Keller, Jye O’Keefe, Jessie Attard and Jock Goodyer completed the top 10.

After what was a great race for the runner-up spot both Matt Egel and Corey McCullagh both failed to finish after contact with slower traffic ended their race with two laps remaining.

Six heat races were conducted with the fastest to the front followed by a complete invert in the second round. All three heat races in the opening round were won from the outside of the front row with James McFadden, Matt Egel and Corey McCullagh taking victories.

The second round of heats would see two of the main contenders strike issues with McFadden clipping Lisa Walker in turn 1 sustaining a left rear puncture ending his race. Portland’s Brock Hallett was the other as he rolled in turn 2. Hallett was able to restart but the mechanical defect flag was displayed therefore Hallett still obtained heat finishing points.

The three Time Trial groups saw Marcus Dumesny pace group 1 with a lap of 11.542, session 2 by Brock Hallett 11.427 while Lachlan McHugh was quickest overall in group 3 with a time of 11.276 seconds around the 372-metre venue.
The B-Main saw a multi-car accident with Grant Stansfield and Peter Doukas making contact in turn 1 on lap five with both cars rolling bringing on the red lights. James McFadden would win the B-Main advancing to the final along with Jessie Attard, Adam King and local Mount Gambier racer Scott Enderl.

The Speedway Australia Sprintcar Super Series now heads back across the border for rounds 3 & 4 at the Premier Speedway in Warrnambool with the running of the 50 for Fifty event on Friday and Saturday night (January 22 & 23).