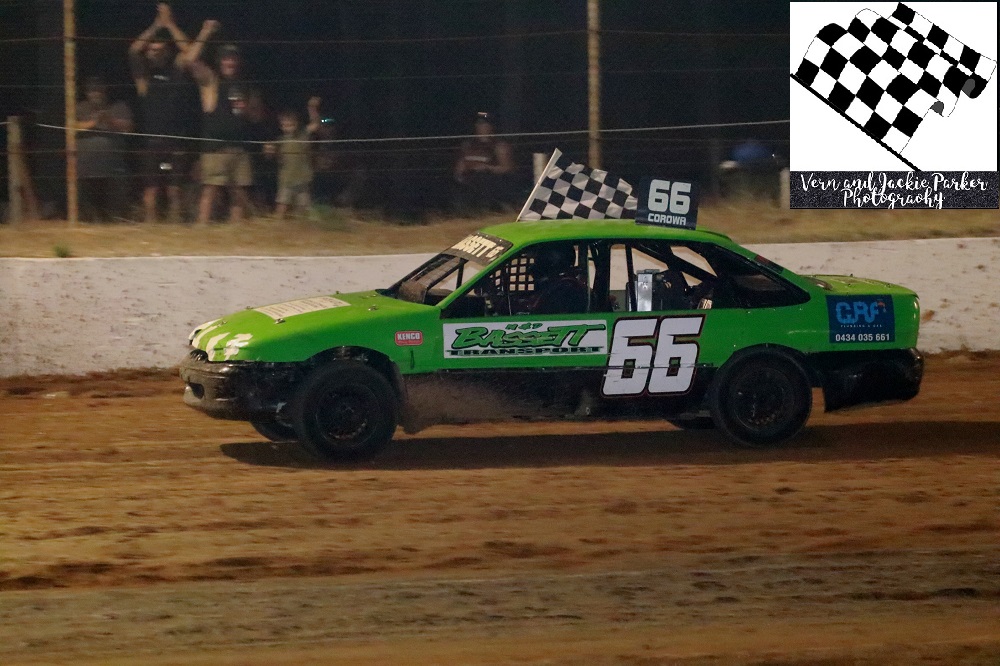 Cars from across Victoria and New South Wales competed in the Grand Prix Midgets feature event with three heat races to determine feature race starting positions. Paul Perry was on the pace in heat one taking that win with Anthony Lea and Ash Booker showing great speed further back in the field before Booker won the second heat in a much faster race time and lap time than the first heat. Booker then won the third heat and was setting lap times faster than the previous race once again.

The field top eight qualifiers was then inverted for the feature race with Booker starting from eighth and Chris Fowler seventh. Benalla man Shawn Ward started in sixth whilst Shepparton race Alex Hudson – Myers started in fourth for the fifteen-lap final. Lea led the initial lap from Daniel Meredith and Terry Brown another Goulburn Valley racer. By the end of lap five Lea was leading Brown, Janelle Saville from Goulburn New South Wales, Booker, and Fowler.

Fowler moved ahead of Booker for fourth and soon after Brown took the lead on lap seven and Fowler raced to the front on lap ten. Brown was second and Booker in third then Lea and Saville. Fowler then in a tight tussle with Booker came away with the win five laps later with Booker, Brown, Saville, and Mark Blackeby the top five.

Goulburn Ovens Sedans competed in the Col Young Memorial with the visiting Goulburn Ovens Sedan Association competitors filling the field. All competitors competed in each race. Mitch Watts returning behind the wheel won the first heat race. Tom Barnard won heat two and Mal Bassett won the third. Bassett from the pole position lead Barnard and Sid Davey on lap one of fifteen before Barnard dropped back to fourth by lap five behind Bassett, Davey, and Justin Brockley. Bassett continued to lead at lap ten with Watts now in fifth spot. With a three second gap between himself and second Bassett won from Davey, Brockley, Barnard, and Watts.

The Goulburn Valley Open and Production Sedans combined to compete with Mark Bergman and Bevan Hutchins winning heats in round one, before the rest of the night the drivers competed all together. Bergman won again in the next heat and the last. Bergman led the final early and looked good for victory however failed to finish the race. The overall winner of the race was Jack Houlahan. Houlahan was also top Production Sedan competitor from Geoff Lee and Jordan Tombyn. Scott Smith was the top Open Saloons finisher in second spot overall. Smith defeated Matt Smith in the Open Saloons. The overall top five in the final was Houlahan, Scott Smith, Lee, Matt Smith and Tombyn.

Rounding out the evening was the Victorian Speedway Council Sports Sedans. Felicity Roycroft from Kialla won the first heat race, Bendigo’s Rob Lock the second and the third with all three heat races determined by less than a second margin. Right from the start Roycroft assumed control of the race lead. Roycroft was too good for Lock in the final winning by .577 in a great finish to the race. Malcolm Knight finished third, Chelsea Hodge fourth and Shaqkira Blake in fifth.