A huge year ahead for Victorian Mini Sprints, national title at Nyora

A huge year ahead for Victorian Mini Sprints, national title at Nyora 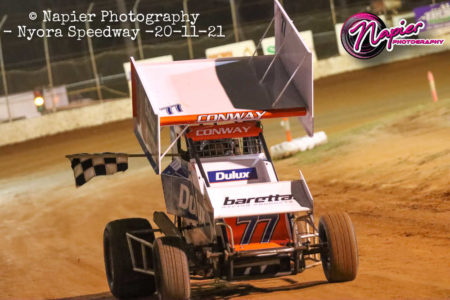 The Victorian Mini Sprints have kicked off their season with the first race meeting of the season at Nyora Raceway on Saturday just past with Michael Conway taking the win as drivers took the opportunity to try set ups before the upcoming Australian title in February at the same venue.

Danny Stone and Harley Graham visited from Sydney to take the same opportunity as locals at the little bullring whilst Conway won all three heats and then the final event of the evening. Mixing it up with Conway during the evening was Andrew Burleigh, Ally Moore, and Daniel James. James finished second in the final with Moore in third.

Race drivers from the Victorian Mini Sprint club and the Victorian Compact Speedcars are both invited to each other’s racing so that they can support each other during the season, as a result and with Queensland and New South Wales Lightning Sprints support, the Victorian club is planning to have twenty plus entrants at the national title on February 12th.

Rahmon Rivero from the Mini Sprints Club confirmed the commitment to crossing over. “We obviously chose to race a class with Wings for many reasons, one of them is the extra control and therefore speed we can get by running aerodynamically with the Wings. However, we are keen to support our friends at the Compact Speedcar club knowing that we are also getting support from drivers amongst that class. So, you will see our names cross over and theirs into our entry lists also.”

With the support from Speedway Australia for the two clubs to go back and forth into each other’s fields, the benefit for both will see extra interest in open wheel grass roots racing and extra interest from fans seeing larger fields more often.

The club has re-confirmed that R & K Alignment & Exhaust is the naming rights sponsor for the 21/22 season National title. The business from Kyabram in the Goulburn Valley has great expertise in Classic and Custom Cars, Exhausts and Exhausts modifications whilst all things automotive are part of what they do. Rahmon and Karen are great people and continue to contribute to race divisions and clubs they become involved with to share their passion for the sport.

Also supporting the February 12th national title will be Ultimate Awards who are a trophy and awards business from the South East ran by Andrew Burleigh and his partner, Starwest Drilling from the Bendigo region who specialise in surface and underground drilling to those in the exploration and mining industries.

Louise at Napier Photography one of the premier photographers of the sport is also onboard with the Victorian Mini Sprints Club for the full season supplying images and will do some special promotion with us as we work through January and February to promote the event and Dean at DMT Sports Media has been involved our club through many administrations and will continue to work with us and have our promotions reach many in media circles who can help us prosper as a racing club.

Another business supporting us is Fourth Designs for all our Website and Graphic needs. Scott looks after our website and any improvements the site requires and general maintenance as well as providing graphic support for promotions.

Secretary Ally Moore turned the tables on media and asked Dean from DMT Sports Media what he thought about Victorian Mini Sprints and the upcoming season. “I have watched the Mini Sprintcars for many seasons and I have to say the club is heading in the right direction in terms of the talent. The talent in the class is increasingly putting pressure on each other and a sign of great respect is when the likes of Danny Stone, Pete Styles and previously Chris Davis come down to race with the club. The title at Nyora will be sensational. The track is absolutely suited to close racing with cars this size and slide jobs on the right race track.” Dean shared.

Maureen and Ally would love to hear from racers who need guidance to get a race car and get involved with the club. With this Australian title coming up there is no better time to get onboard.