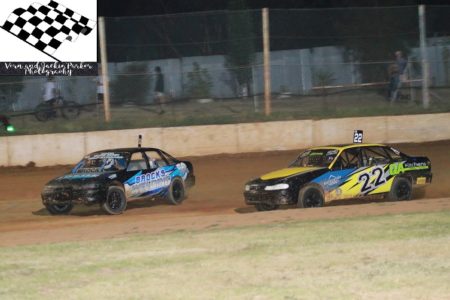 Wangaratta City Raceway played host to its local competitors on Saturday night with all the club classes running for points. The Production Sedans were having a track series round along with members points up for grabs for all classes. A healthy crowd enjoyed a relaxed night of racing with winners being Raymond Ussher, Martin Heiner, Felicity Roycroft, Riley Balins, Justin Brockley, and Trevor Evans.

Raymond Ussher picked up the win in the Production Sedans putting down fast laps with consistency in the final whilst Tom Barnard, Rodney Anderson and David Lord were the only others to finish in that order.

In Sports Sedan’s Martin Heiner who has recently only just returned to the Speedway to compete after a little time away and becoming a father, won his second feature event in a couple of weeks when he finished ahead of Felicity Roycroft and Matthew Brooks. Josh Beattie finished fourth and visiting Maryborough woman Pauline Fell finished in fifth spot in her new race car.

Roycroft continued her dominance in the Ladies Open Sedans with a victory in front of Tay Cummins. Roycroft is well on top in this class locally and thinking about her finishing rate in the Sports Sedans, she could be leading that class also. Roycroft, Cummins and Janie Patton were the top three with Jaimi Barber and Pauline Fell the top five in the Ladies.

Riley Balins and Cobie McGraw were the only two Junior Sedan drivers to finish the final for the Junior Sedans whose Victorian title is at Wahgunyah this Saturday night. Balins the winner here.

Once again Trevor Evans won the Standard Saloons finishing well ahead Daryl Joosten and Josh Delarue. Jaimi Barber was fourth with Scott McAuliffe in fifth spot. Evans was lapping around a second a lap quicker than the rest of the competitors in the final.

The Goulburn Ovens Sedan Associations points event for Goulburn Ovens Sedans was again won by Justin Brockley. Brockley is currently on top of his game and has the wood over Ross Maclean who has been the classes most dominant racer in recent seasons. Corey McDonald was second, Maclean third then Stuart Balins and Janie Patton.

Wangaratta City Raceway is next in competition on March the 26th with the Australian Compact Speedcar Australia Title, Production Sedans, and local club classes.