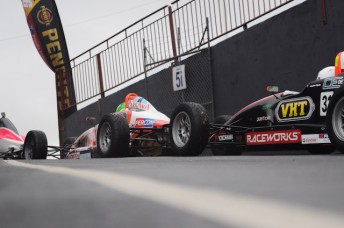 The Yokohama A048 made its competitive debut as the new control tyre for the Australian Formula Ford Series at Sandown last weekend, following the category’s switch from the Avon ACB10 at the end of last season.

As were the indications during pre-season testing, the tyre provided excellent durability and drivability across the Sandown weekend, leaving team owners and leading drivers impressed with the product.

According to Mike Borland, head of Borland Racing Developments and the man behind the Spectrum Formula Ford chassis, the Yokohama’s made a flawless debut.

“The tyres are fantastic,” said Borland. “They’re consistent through a whole session, they don’t go off.

“We’ve run them on 40-degree days in testing at Winton, and a lot of the time out last lap of the session is the quickest. At the other end of the weather scale, they’re better in the wet.

“We’re getting more than three test days to a single set, whereas with other control tyre brands we’ve had in the past a set would barely last a day.

“There’s no doubt that we can do more racing on these tyres, plus it gives the drivers a more consistent feel.

“For the more experienced guys, it’s been a great move. It gives them something more to think about, and it broadens everybody’s experience.”

Leanne Tander, who won the opening round at Sandown and has extensive experience in Formula Ford, agreed that the new rubber hit the mark.

“I don’t think it’s a case of being better or worse, but these tyres certainly have great traction,” said Tander.

“It feels like they’ve got a little bit more grip as well. But the best thing about them is that they can punch out the same lap-times after they’ve done hundreds of kilometres in testing. We can keep using them and they’ll keep performing, punching out the same times as when they were new.

“When you have a category where controlling costs is so crucial, that’s super important. It makes a big difference for the young guys with tight budgets. That’s the major benefit.”