A field of 40 for State Series opener

A field of 40 for State Series opener 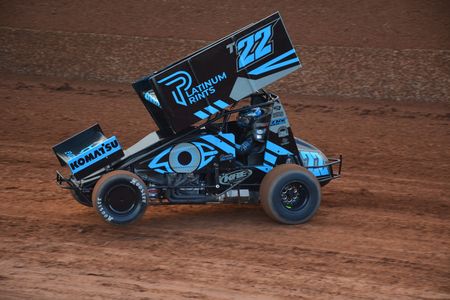 For the past two seasons, the impact of the COVID virus on overseas travel has made it all but impossible for international competitors to undertake any kind of racing activities in Australia, and Queensland in particular. All that changes this Wednesday night (January 5) at Archerfield Speedway when Californian ace Carson Macedo takes on several of Australia’s very best Sprintcar exponents in the opening round of the QLD/NSW Sprintcar States Series. A frequent visitor to Australia before the COVID disruptions, Macedo returns to our shores fresh from a third-place finish in the 2021 World of Outlaws Championship and, with his sights set on dominating down under, he will also contest the Titan Garages Brisbane Open on Friday and Saturday nights.

In addition to Macedo and all the local stars, the entry list for Wednesday night includes current national champ Jamie Veal and newly crowned Victorian titleholder Matthew Dumesny, along with drivers from four states. Veal has contested three events at Archerfield over the last couple of weeks and, whilst he has finished on the podium each time, he is yet to find his way to victory lane. Certainly the challenge of taking on Macedo will have Veal primed for a big performance, but a critical element in securing a win will be finding a way to tame local top guns Luke Oldfield and Lachlan McHugh. So far this season, Oldfield and McHugh have collected four feature race wins apiece at Archerfield in their domination of the East Coast Logistics Track Championship and, whilst the field this week brings new competition, it is almost impossible to conceive of a scenario where they are not in the thick of the action at the front of the field in the concluding stages of the 35-lap feature race.

As the only other driver to win a feature race at Archerfield this season, and having finished on the podium in the last two track championship rounds, Tasmania’s Jock Goodyer is obviously a very serious contender, while Brock Hallett impressed on Sunday night with a top-five result and will be joined in the field by fellow South Australian Brendan Quinn. Brimming with confidence following his state title victory just a few days ago, Matt Dumesny will be joined on track by his brother Marcus and several other NSW-based teams, including the likes of Ian Madsen, Michael Saller and Jackson Delamont, all of whom are no doubt looking to find peak form in readiness for the return of racing in their home state with the opening of the new state-of-the-art venue at Eastern Creek.

Also on the program will be the annual Modified Sedan Firecracker, a race that never fails to disappoint in delivering argy bargy tin top action aplenty. A field of 24 has been assembled for the event, including current national champion Kye Walters from Victoria, former titleholder Max Clarke from New South Wales and drivers from as far afield a Cairns and Townsville. Walters is obviously the man of the moment, but Clarke is a driver who seems to understand the obligation to entertain and his performance to come from the C Main and B Main before rounding up the entire field to win the Australian Championship at Lismore in 2011 remains one of the most memorable championship wins the category has ever seen. Since then, Clarke has remained a force who is never afraid to run the highline, even when his opponents have refused to consider the idea. Beyond Walters and Clarke, there are certainly plenty of names amongst the entries with the credentials to emerge as the Firecracker champion, including two more former national champions in Greg Worling and Aidan Raymont, as well as defending Firecracker winner Nathan McDonald and his brother Shane, who finished third last year. Tim Weir, Rodney Pammenter and Darran Lester have also enjoyed success at Archerfield in recent times, while Adam Jorgenson and Hayden Stephenson are not making the long haul from the far north purely to make up the numbers.

A win from Andrew Parkes at their last outing has livened things up within the Compact Speedcar ranks and if he can repeat the performance on Wednesday night, the likes of Matt O’Neill and Harry Stewart will certainly find their status as the category top dogs under threat.

Gates open at 3.00pm for online ticketholders and general admission ticket sales are from 4.00pm, with early racing at 4.30pm. The main program, which will also feature the future stars of the Formula 500 Juniors, will get underway at 6.00pm.