A different kind of big bash coming to Daylesford this weekend

A different kind of big bash coming to Daylesford this weekend 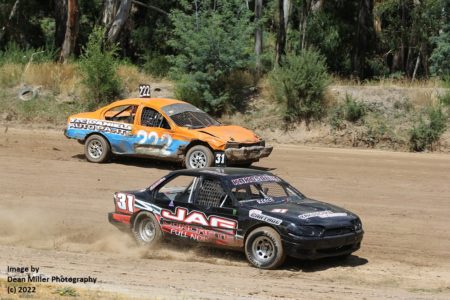 This Saturday and Sunday the Big Bash comes to Daylesford. No not the bat and ball type, the Car-on-Car type as the Crash and Bash Association headlines the racing at Daylesford Speedway across the weekend supported by Daylesford Sedan classes, plus Standard Saloons, Junior 1200 Sedans and Ace of Spades Vintage Hot Rod Club.

With the return of the Dog Leg for the Crash and Bash race drivers, the interest for this years ‘Bash in the Basin’ has both the Open and Ladies fields excited for the weekend.

Last season’s winner at Daylesford in the Opens in Jarrod Hughes leads the nominations in which drivers hope to win the feature event of the day over forty laps. Anthony Sgroi, Ron George, Daniel Kettels, Steve Mitchell, Jaidyn Dredge, Jason Judd, Richard Lewandowski, Mark Hebblethwaite and Alan George are just some of the competitors in the Crash and Bash that includes a number of Daylesford club members also competing.

In the Ladies Crash and Bash Lea Judd returns to a venue she won at last season and is up against the likes of Kath House-George, Mel Argent, Danni Marshall, Nikki Sonnet, Taylah Hughes and Steph Grace. Hits, spins, push, and shoves are all part of the action that sometimes leads to wild rollovers and big-time door smashing crashes.

All the local Daylesford club classes will also be in action on the weekend plus the return of the 1200cc Junior Sedans who have put together a strong field of entries including Daylesford member racers Arthur Hutchinson and Riley Taylor.

Coby Kakoschke fresh of a win last Saturday will be up against some fresh competition including Ryan Daly and Ian Bartlett whilst both the Humphrey lads will be behind the wheel making for a great battle in the Modifieds. Jhett Cruise will have some new competition from Rhys Meakins and Bailey Kakoschke as always will be in the mix for victory in Daylesford Juniors.

Chris Hay had a great result on Saturday amongst some tough competition in the Street Stocks and he will be keen to stretch a points gap between himself and the very consistent Des Robinson and Glen McCoubrie. David Clark and Stephen Brook are a couple other competitors to keep an eye on.

Our Ladies Sedan racers continue to impress and Kate Meyer our winner last weekend up against Jane Laidler, Sarah Meakins, Richelle Jenner, Charmaine Bryans, Marlena Argent and the return of Pauline Fell. We have some new Ladies behind the wheel also which continues our growth of Ladie’s racing.
Andrew Cormack, Dean Pederson, Tim Hutchinson and Rick Stowe will be amongst the front runners in the Standard Saloons this weekend, with Hutchinson a proven winner at the Daylesford basin. The Cormack family continue to support our Standard Saloon class development in Daylesford and expect them to figure in results.

The Junior 1200cc Sedan field is terrific in numbers. With eleven cars on track, the class continues to grow and our very own Arthur Hutchinson and Riley Taylor will face stiff competition from the likes of Braiden Webster, Harry Dunn, Bryce Leek and Toby Cook. Hutchinson has been in winning form this season once again, however the talent is very strong in the line-up.

Rounding out all of our entertaining on track action is the Ace of Spades Club. The Vintage Hot Rodders bring out their wonderful machines for a squirt and there is always interest in these machines from the 30s forward.

The Canteen and some terrific vendors at the club will be operational Sunday. Daylesford Speedway has an onsite bar, no BYO allowed. $4 beers $6 Spirits.

All adults are $15 to enter, whilst any nominated race driver, Life members & aged pensioners are $10. Children 13 to 17 are $5 each and twelve and under are free, no family ticket at these prices.

If you enter on day one and advise the ticket staff that you are coming for both race days the pricing is $25 for adults, whilst any nominated race driver, Life members & aged pensioners are $15. Children 13 to 17 are $5 each day and twelve and under are free, no family ticket at these prices.

Racing begins at 11am and the gates open early from 8am with competitors due at the track by 10.00am and pit gates shut to racing entrants by 10.30