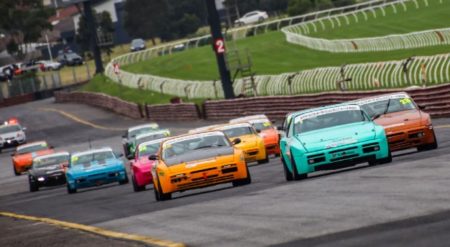 The Porsche 944 Challenge field return to the circuit this weekend at Sandown Raceway for Round 1 of the 2022 Victorian State Racing Championships.

Sidelink Motorsport is one of three new teams making their debut this weekend with Car #44 piloted by driver Mark Verdino. After a successful test with the Beller Motorsport Team before Xmas, Mark took the plunge purchasing the car raced by John Morrow before COVID hit in 2020. The car arrived from Perth just last Friday with only enough time for it to be checked mechanically to be readied for Round 1.

Carter Fox Motorsport debut with Carter Fox and his father Ian after purchasing the ex-John Kennedy car. Carter is now fighting fit after an accident late in 2021 and is looking forward to making his debut this weekend after only having his first drive of the car just last week when he completed his OLT.

Vlad Kennedy is also having his first race meeting after purchasing his car from Marius Catrina in the off-season and promptly gave the car a birthday with new paint, and new parts, it now looks better than even in its new Porsche Carmine Red Duco with Gloss White wheels and will stand out on the track!

As exciting as the battle up-front will be the battle for the Rookie of the Year with these three drivers in contention from Round 1 for the title.

Returning to defend his 2021 Championship is Jamie Westaway, proudly displaying the #1 on the Ausfield Oils backed Porsche, who will be joined yet again on track with his family Members – his Father Tony Westaway in #3 sporting a new livery for 2022, along with Michael Westaway who is, unfortunately, missing this weekend but will be back for Round 2.

With his eyes firmly set on regaining the #1 sticker is outgoing champion Cameron Beller – Beller is running his old #55 for the first time since 2016 after winning the championship 4 times across 2016-2019 and is looking forward to resuming battle with the Westaways in 2022.

One of those not wanting to let Beller and the Westaways have things all their own way will be Dick Howe – the racing veteran starts his 20th year of 944 Competition and is always a force to be reckoned with at Sandown Raceway.

After joining in on the Beller/Westaway battle on a couple of occasions in 2021, Adam Brewer will also look to make himself a permanent fixture in that challenge – after taking his first Victory at the non-points event at Phillip Island in March last year, Brewer has his sights on taking his first Points victory.

Mark Taubitz is another who had an up and down 2021 – a strong round at Phillip Island in May was behind Beller and Westaway provided motivation but an incident in the first race at Island Magic ended the season on a sour note. A new car in the works to hopefully debut later in the year is what Taubitz is hoping will help him battle with the front runners on a consistent basis.

Starting his second season will be Josh Brisbane – fresh from securing the Rookie of the Year title in 2021. The stunning Viper Green 944 will have his eyes set on placing himself firmly inside the top 10 this season.

Andrew Jackman is another looking to move forward this year as he continues to develop and try to unlock the speed in his stunning Miami Blue Poolmaster Bayside backed 944. Some good luck will certainly help him secure a higher position in the points standings also.

Buoyed by his performance gains at Phillip Island which saw him firmly in the mid-pack is Andy Jones – a test day late last year did wonders for Jones and he is very excited to try his tweaked and tuned reverse Gulf liveries 944 at Sandown after struggling with setup issues at the last visit to the circuit in 2021.

In the same boat as Jones is his fellow Countryman Keith Marriner. It won’t be all tea and biscuits for the two Brits sharing the garage as they continue their own battle of bragging rights for Top Pom in the 944 Field – a recent test for Keith also has him motivated to find speed on board the Seat Time Race Solutions 944.

Embarking on a full season in the 944 Challenge is newcomer Jack Atley. Suiting up in the second official Beller Motorsport car, Jack will start his first event at Sandown in the 944 and take the lessons learned at Island Magic in November to mix it with the rest of the 944 faithful with his Pit Lane Clothing backed car.

Returning for 2022 is Jim Mitchell in his Martini liveried car. Jim’s best results have come at Sandown which suits his car and style the best of the Victorian circuits, and Jim will anticipate adding some top ten results to his tally this weekend.

Hoping he has finally shaken his reliability woes is John Vainoras – with John looking to get a solid season of uninterrupted racing in to be able to consistently show the flashes of pace he has proven at various points.

The WA border closures extensions have meant we are lacking the entries of Sandgropers Tim Wolfe and Andy Tudor who we hope to see return for Round 2, along with Manny Mezzasalma – who had to withdraw due to delays in having his new engine prepared in time for Round 1.

Rounds 2 & 3 will hopefully see an influx of returning entries, as along with the aforementioned drivers we expect to see Pedr James, Toni Andreevski, Lyndon Watson, Rob Holding, Clayton Sinclair and Peter Doherty along with previous series champion Chris Lewis-Williams also all expected back on track to give fields of 20+ Porsches on track.

If you like what you see on the circuit and want to get on board with the Porsche 944 Challenge series, the series is enjoying a resurgence with a number of new cars available and returning to competition, along with some freshly built cars being finalised with some of those for lease, or sale. Get in touch with the guys in the series if you’d like to get on track and join in the action.