The TA2 Muscle Car Series has welcomed the arrival of its 40th car into Australia. 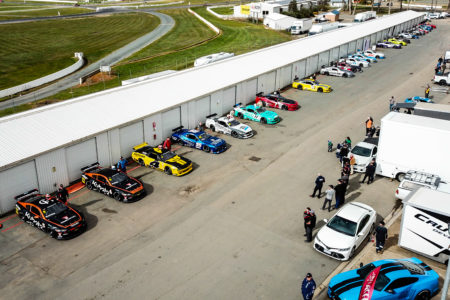 The category received a container from the United States carrying the 36th to 40th cars last week, all of which have already been sold to a combination of new and existing competitors expanding their commitment to the series.

Following the arrival of the 40th car, series manager Craig Denyer confirmed that TA2 car constructer Howe Racing Enterprises has been commissioned to build a further eight cars to send to Australia before the 2020 season.

The 40th car is a Ford Mustang purchased by Ron Cremen, to add to his existing Mustang to form a two-car Racehire outfit to run as a lease operation for the 2020 season.

Cremen saw the increasing popularity and growth of the series as a justification to expand to a second car.

Another car within the latest delivery is a Chevrolet Camaro purchased by Tasmanian Tim Shaw, who will run the car alongside his recently purchased Dodge Challenger from Keven Stoopman to also form a two-car outfit for 2020.

The TA2 Muscle Car Series heads to Sydney Motorsport Park with a record 31-car field for the penultimate round of the series on September 28/29.

“The popularity of the series has exploded over the course of this year and that has warranted the decision to bring a second car into the Racehire team for the 2020 season,” said Ron Cremen.

“When the opportunity became available to buy a new car it was a no-brainer decision.

“The demand was there for another lease car in the series, and we are already fielding a number of enquiries about the second car in the lead up to next year.”

“It is amazing how quickly this series had been embraced by both the competitors and fans,” said Craig Denyer.

“To have 40 cars sold in just our second year of a national series is a testament to the effort that Peter Robinson and the team behind the TA2 Muscle Car Series have put in to get the specifications right for this market: low-cost racing with a big-reward experience that sound, look and race like real muscle cars.

“On top of the 40 now sold, Chas Howe (of Howe Racing Enterprises) has been commissioned to build another eight race cars between now and the end of the season, plus in the next few weeks we hope to announce our 2020 race schedule which will include some exciting opportunities for our racers and fanbase.”

Next Story Offroaders to fly in the forest