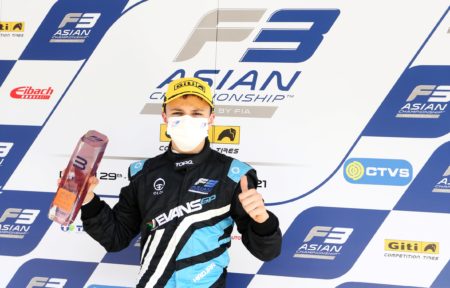 Australian-owned 3Y Evans GP Team OLOI certainly found success in its debut weekend in the opening round of the 2021 Asian F3 Championship.

With an incredibly competitive field of 23 international drivers including F1 test drivers and experienced F2 and FIA F3 drivers, 3Y Evans GP Team OLOI showed it could hold its own in competition against the likes of established top teams such as Prema Powerteam and Hitech Grand Prix.

Round One started with the first test sessions of the 2021 Asian F3 race season on Wednesday and Thursday, with Patrik Pasma of Finland and Isack Hadjar of France finishing a highest of P4 and P2, with the UK’s Casper Stevenson into the top 10 and Russian Irina Sidorkova making constant improvements.

Friday’s Official Practice saw Isack Hadjar finishing at the very top of the timesheets to be the only driver into the 1:33’s, on only the third day of competition for 3Y Evans GP Team OLOI.

The team made it through a difficult qualifying later in the day which consisting of two quick 15-minute qualifying sessions, the second of which was red flagged before hurriedly resuming with just a few minutes to go. The highlight of qualifying was Hadjar taking P5 in Q1 for the Race One starting grid, but for his Race Two and his teammates starting positions for the races, the four 3Y Evans GP Team OLOI drivers would have to work their way through the strong field.

Race One
Friday’s Race One followed qualifying, under the typical warm, sunny and dusty conditions of the Dubai Autodrome which drivers would experience for all three races. The event was the first Asian F3 race for all the 3Y Evans GP Team OLOI drivers, and the first F3 events for Hadjar, Stevenson and Sidorkova. Despite this, the teammates gave a solid showing with Pasma finishing in the top 10 after moving all the way up to P7 during the race, whole Hadjar finished 8th. Teammate Casper Stevenson finished 17th while Irina Sidorkova started P22 and moved up to finish 19th.

Race Two
Saturday morning’s Race Two saw 3Y Evans GP Team OLOI F3 rookie Isack Hadjar besting some of the world’s top drivers, with the Frenchman jumping to P3 on an amazing start. He was able to hold onto the position for the entire race, which saw an amazing battle between the top 4 drivers as they battled each other while putting a 5+ second gap to P5. Hadjar took the checkered in 3rd to give 3Y Evans GP Team OLOI its first podium finish in only the second race event for the new Aussie team, and in the process, Hadjar took the 2nd fastest lap of the race by finishing just .102 sec off F1 test driver Guanyu Zhou and just a half second off Prema’s Dino Beganovic in P2, a great achievement for Hadjar who hails from French F4.

Teammate Patrik Pasma was in P8 on the first lap, but dropped to P10 towards end of race, while Casper Stevenson once out of traffic started building up laptimes, but had to settle for 16th. However, Irina Sidorkova onced again managed to pick up several positions by starting P21 but finishing 19th.

Race Three
Once again Isack Hadjar had a brilliant race, starting P9 but moving up to P5 during an amazing first lap, and up to P4 by halfway through the race to finish just off the podium behind Hitech’s F2 driver Roy Nissany. Meanwhile teammate Irina Sidorkova had her best race yet, starting in P21, but finishing 15th after moving up an entire 6 positions. Casper Stevenson also was on a personal best, reaching as high as P11 but dropped to finish 16th after being hit by a fellow competitor which forced him to spin in the last corner. Patrik Pasma reached P9 in lap one, unfortunately dropping back to finish 11th by the checkered.

With 3Y Evans GP Team OLOI drivers looking to improve in Round 2 this week at the famous Abu Dhabi Yas Marina F1 Circuit, the team goes into Round 2 with a strong 3rd in the Team standings, and with Isack Hadjar 5th in Driver points. With the compressed 2021 Asian F3 Championship schedule, Round 2 will commence Wednesday, January 3rd at the Abu Dhabi Yas Marina F1 Circuit with two test sessions to be followed Thursday with Qualifying and Race One, and Friday Races Two & Three. Round 2 will undoubtedly bring more high-level competition from the 23-car field of top level formula pilots from around the world. Please follow www.EvansGP.com for updates.

OLOI is a San Francisco-based motorsports-inspired line of apparel which focuses on blending performance with time-proven classics in its product line. For more information on OLOI, please visit: www.OLOIinc.com.

3Y Technology, based in Dubai UAE and Paul Ricard, France, is a professional racing team which competes in Asian F3, UAE F4, GT and Touring Car competition and testing, as well as driver performance development. Having won multiple racing championships throughout world class motorsports series, the 3Y Technology Team have proven their presence and high level of skills in the field. For more information please visit: www.3ytechnology.ae.