Hayden and Bradl wrap up pre-season testing in Portugal

Hayden and Bradl wrap up pre-season testing in Portugal 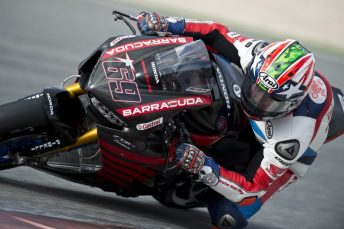 The Honda World Superbike Team has completed the second and final pre-season European test of its 2017 schedule today at Portimão Autodromo do Algarve, where Nicky Hayden and Stefan Bradl continued their preparation for the opening round of the season on board their brand-new Honda CBR1000RR Fireblade SP2 machines.

The first day of action at the Portuguese venue was characterised by a limited amount of track time available to the riders, who had to wait for the track surface to dry up after some overnight rain. Today, both riders enjoyed far better conditions, which helped them in trying to improve the feeling with their machines as they kept working hard with their crews to move forward with the testing programme.

Despite having ridden at Portimão on no more than two occasions before – the most recent being this week’s world press launch of the new Fireblade – neither Hayden nor Bradl have any racing experience at the spectacular circuit located on the southern coast of Portugal, which is back on the World Superbike calendar after one year of absence. Nevertheless, the two Honda standard bearers quickly got to grips with its elevation changes and blind crests and improved their lap times considerably before the test drew to a close.

The team will return to their Dutch headquarters in the Netherlands to get ready for the official test and season opener at Phillip Island, which will be preceded by the official team launch taking place at Salzburg’s Hangar-7 on February 6th.

It was definitely not the easiest test, but it surely helped the team to collect a lot of data. It was also useful for me to come and learn this track. It has some fun corners but it definitely takes a few laps to get comfortable with the blind crests. Speaking of the work with the bike, the power is still not delivered quite smoothly enough so it wasn’t easy to find the grip and keep the bike calm under acceleration. We were unable to improve every area in quite the way we wanted but with the team’s work during these days we hope to be more competitive in Phillip Island, because there’s still a gap to bridge from the front runners.

It was not an easy two days of testing, as unfortunately we faced some issues that did not allow us to improve the way we would have liked. We still have to fully sort out the electronics and mapping for this engine so the bike is still a bit nervous. The data we collected in these four days of testing will be crucial in order to further develop the bike and be ready for the season opener. We will keep working hard and keep the motivation up in order to competitive for Australia and I’m sure we will be on the pace by then.

We started this week of testing with a lot of unknowns as it was our first outing with the new Fireblade, so we were definitely not expecting everything to be perfectly in place. After all, that’s what testing is for! On the bright side of things, we did a lot of kilometres here and in Jerez and the engine did not have any mechanical issues, which is very important as we have only a limited allocation of motors throughout the year. What we have to focus on now is finding the right mapping for the engine, which is our priority at the moment. We have some days to work on it and another test at Phillip Island before the first race, and we’ll be ready for it!