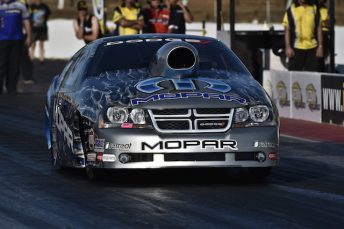 MEDIA RELEASE: The quickest Pro Stock car in the country driven by Lee Bektash (Keilor, VIC) will lead the first Pro Stock field to Adelaide International Raceway since the 2013 Spring Nationals this weekend for the SA Summer Nationals.

“As everybody knows nothing sounds like aspirated engines through the gears in 4.5 seconds and climbing towards 10800rpm, do you blame them,” he said.

“It’s not the ideal numbers we should reward the ever so loyal Adelaide crowd, but if we get five cars then that’s 30 Pro Stock passes and with Gerry and Joe and Chris hungry to wipe out the next generation including me, I promise you we will put on a great show and one of us will reset the (1000 foot) record.”

Traditionally Adelaide is a Super Stock town and the fans always appreciate what is considered the “drivers class” of big brother Pro Stock.

While promising to reward those fans, Bektash is confident of running quick numbers following a strong showing while match racing with Emilio Spinozzi at AIR in March of 2015.

“Pro Stock is known to be the most difficult and expensive class to run, I would call it more of drivers class.

“It’s great to line up with some of my heroes from the Sportsman days, Joe Polito, Gerry Parente and Chris Soldatos in the hands of Australian Pro Stock legend Peter Ridgeway.

“Adelaide is a great track, believe me it’s one of the smoothest tracks anywhere.

“When the air comes around at night we will be keen on beating the current 1000ft record of 5.87 – we have run 5.84 last year when we raced Spinozzi but we didn’t back it up.

“I’m looking forward to going low 5.80s and hopefully we can run when the sun settles.”

The Garmin VIRB ANDRA Drag Racing Live Stream will be available on Sunday December 4 and will be made available for FREE to all outside of the Adelaide metro area. Visit Motorsports TV for more details.