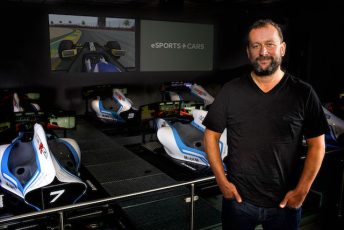 MEDIA RELEASE: As the explosion of eSport continues to be the Marketing story of 2016, eSPORTS+CARS is pleased to announce that Lets Race has become the home of the Virtual Race team and will work on a number of projects with the team.

With ten fully networked simulators available at its flagship venue, the eSPORTS+CARS team will now enjoy all the benefits of Lets Race for training and competition purposes, allowing its drivers to train together and to broadcast events from.

In turn, eSPORTS+CARS will provide a platform for Lets Race to engage with a new audience and showcase its simulators to gamers used to racing in their homes on less sophisticated hard and software.

As a celebration of the partnership, an open race event will be held at Lets Race, with the winner invited to join the eSPORTS+CARS team as a VIP guest at a $1 million virtual race in Las Vegas.

Gamers and drivers can qualify for a grand final by attending Lets Race in October and November 2016. The top 10 drivers will fight it out in a head to head race at Lets Race in December.

The winner and a guest will then be flown to Las Vegas as a VIP guest of eSPORTS+CARS to watch the $1Million Virtual Race that will be held there.

With teams, leagues and individuals from the world of sport investing heavily in the eSport world, this type of collaboration is becoming a fast growing trend.

Manchester City led the charge of signing gamers to represent football clubs in the real world earlier in the year and more recently the Philadelphia 76ers bought two of the biggest eSport teams.

With 76 per cent of gamers stating that their eSport viewing is taking them away from watching real sports, and only six per cent of millennials saying they trust advertising, major sports franchises and brands are ensuring they can talk to this hard to reach demographic where they are; in the eSports world.

“Having had a long term relationship with the wider Capsicum Motorsport group for a number of years, eSPORTS+CARS used the Lets Race facility for its launch event earlier this year”, said eSPORTS+Cars Team Principal Darren Cox.

“I was incredibly impressed with the set up there and we’ve been discussing how we can collaborate since then. I’m really pleased to launch an exciting partnership with them and to announce this fantastic competition.”

“The space is very fractured and confusing but a partnership with eSPORTS+CARS allows us to engage in a number of initiatives with one partner and to consolidate our communications approach.

“We are delighted to partner with them and to offer them our state of the art facility for training and competition purposes as they continue to lead the charge in professional online motorsport gaming”.