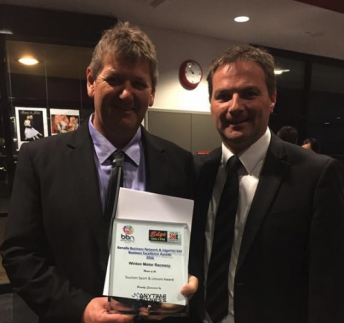 MEDIA RELEASE: Winton Motor Raceway has been recognised for the widespread benefits it generates for the Benalla district, receiving the Excellence Award for Tourism, Sport and Leisure at Friday night’s Benalla Business Network Awards evening.

Winton was also nominated for the Large Business Excellence Award, while it sponsored the Medium Business Award and the Benalla Auto Club sponsored the Agri-business and Manufacturing Award.

“This is a great reward for the small and dedicated team at Winton, this one is for them,” Mr Williams said.

“We have a very close-knit staff team, and everyone works tirelessly to ensure we’re able to run spectacular events and service our customers year-round.

“It’s very satisfying to be recognised for our contributions to sport and leisure in the region.”

BAC Group CEO Chris Lewis-Williams said the awards night allowed the club to contribute to the network of Benalla businesses.

“While we were very privileged to be presented with the award, we were also pleased to sponsor awards for a couple of the other categories,” Mr Lewis-Williams said.

“Being a small regional town, all of the Benalla businesses are inextricably linked and we all support each other to some extent. It was a pleasure to be able to reward other businesses for their excellence.”