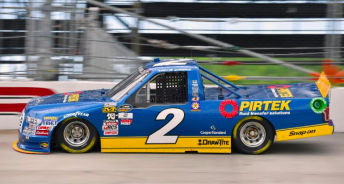 MEDIA RELEASE: Brad Keselowski Racing announced that Austin Cindric will drive a third entry for the organization in the NASCAR Camping World Truck Series (NCWTS) race on August 17 at Bristol (Tenn.) Motor Speedway, plus upcoming races at Canadian Tire Motorsport Park (Bowmanville, Ontario, Canada) and Talladega (Ala.) Superspeedway.
Pirtek, the industry leader in fluid transfer solution sales and service in the United States, will serve as primary sponsor of the No. 2 Ford F-150 driven by Cindric at Bristol.
“I’m really grateful to have the opportunity to run three more races with Brad Keselowski Racing at three tracks that are so diverse; I’m definitely being thrown into the deep end of the pool again going into Bristol,” Cindric said.
“The most important thing I need right now is laps under my belt. The team has a great history at Bristol and excellent knowledge of that track.”
A planned test session at Bristol for Cindric and the No. 2 team scheduled for earlier this month was cancelled due to track maintenance.
Austin has never had the opportunity to test in the NCWTS and the elimination of valuable track time for the young driver is another challenge Brad Keselowski Racing General Manager Jeremy Thompson is confident Cindric will overcome.
“It’s unfortunate Austin wasn’t able to test at Bristol because that’s such a challenging race track and I know how much he was looking forward to testing at a track prior to going to one of these NCWTS races,” Thompson said.
“Austin is a talented driver and he’s exceeded our expectations every time he’s been in our trucks. Our main objective at Bristol is for Austin to run as many laps as possible and learn as much as he can.”
Cindric, 17, enters the race at Bristol fresh off a victory Aug. 5 in the NASCAR K&N Pro Series East race at Watkins Glen (N.Y.) International. Starting from the pole, Cindric led all 41 laps on the way to scoring his second victory in a row in the series.  He claimed his first victory at Virginia International Raceway – also winning from the pole.
Cindric made his NASCAR Camping World Truck Series debut in 2015 at Martinsville (Va.) Speedway with BKR last October where he qualified 14th and ran well before a late-race incident relegated him to a 25th-place finish.
His second NCWTS start came at Phoenix (Avondale, Ariz.) International Raceway a few weeks later, where he scored a respectable 14th-place finish.
Cindric was scheduled to compete in the NCWTS race at Dover (Del.) International Speedway earlier this season.
He was sixth quick in final practice but did not qualify for the race when time trials were rained out.
“From what I understand, Dover is actually like a bigger version of Bristol, so that gives me a little bit of confidence, especially with how quickly we got up to speed and how fast our Ford F-150 was there,” Cindric said.
“I’ve learned a lot more about how to drive a truck and a stock car since my past experience at Phoenix and Dover. We’ll just go to Bristol and be a sponge.”