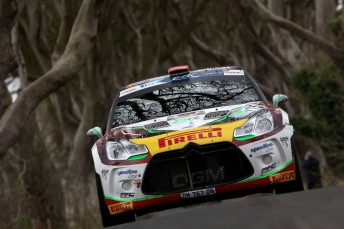 MEDIA RELEASE: The MSA British Rally Championship has travelled the length and breadth of the UK, taking in rounds in England, Scotland, Wales and Northern Ireland and so far this season, three different event winners as well as eight different crews have stood on the podium in the opening five rounds.

The World Rally Championship star has shown his quality, taking the spoils on the Mid Wales Stages, Scottish Rally and Nicky Grist Stages – and comes to the Ulster Rally as the favourite for outright victory.

The Welshman, with Craig Parry sat alongside, wont have it their own way as a chasing pack will all want to topple the series leader.

Tom Cave has been improving in pace as the campaign has unfolded, having  never been out of the top four with James Morgan on the notes.

Cave is desperate to take a win in 2016 and will pull out all the stops to beat fellow countryman Evans in his Michelin-shod Fiesta R5.

Swedish sensation Fredrik Ahlin and Norwegian navigator Morten Erik Abrahamsen (Ford Fiesta R5) have had a rollercoaster of a season to date.

The Pirelli-backed driver pushed Evans all the way on the opening round before landing his first win on round three, the Pirelli Carlisle Rally two months later.

Costly errors on the Circuit of Ireland and the Nicky Grist Stages, along with a mechanical failure on the Scottish, put the Scandinavian in third on the championship points board.

Ahlin is one man who is hoping for the luck of the Irish to help bring him back into the title fight. CA1 Sport teammate David Bogie (Skoda Fabia R5) with Irish co-driver James O’Reilly find themselves seventh in the standings.

The Scottish driver has shown blistering pace this season and will want to harness the speed and return to the podium, which he last achieved on the Circuit of Ireland.

In 2016, drivers have elected to play their ‘Jokers’ to double their points. Two drivers yet to play their card are dark horses for rostrum honours.

Josh Moffett/John Rowan (Ford Fiesta R5) won the BRC element on the Circuit of Ireland and Jonathan Greer/Kirsty Riddick (Citroen DS3 R5), who finished just behind the Fiesta pairing, will want to emulate their success on home ground this weekend.

Watch out too for a whole host of series returnees. Multiple BRC champion Keith Cronin/Mikie Galvin (Citroen DS3 R5) will want a strong BRC finish to show his class.

Local stars Marty McCormack and David Moynihan in their Skoda Fabia S2000 held the lead on the Circuit of Ireland, before a heart-wrenching fuel pump failure denied them a home win.

A committed driver, McCormack won’t hang around in his Kumho-backed machine.

Matt Edwards and Will Rogers have had a phenomenal season in their Mitsubishi Evo 9 in the BRC2 category, wrapping up the title on the previous round – the Nicky Grist Stages.

The pair will be eager to shine on the Ulster as the crew step-up to the BRC1 category, driving a brand-new Ford Fiesta R5.

In the DMACK Junior BRC, Irishman Robert Duggan and Gerard Conway lead the way in the Vauxhall ADAM R2 after securing a trio of wins.

Duggan has shown fine form on both gravel and asphalt surfaces and has a commanding championship lead heading into his second home event.

The Vauxhall star is the only driver in the top seven who has yet to play his ‘Joker’ card this season and he could secure the title on home soil next weekend.

Swedish driver Adielsson has yet to win a BRC round, despite coming close on several occasions. Mattias loves the Tarmac and will be pushing for ‘win or bust’ on the Northern Ireland lanes.

Furuseth’s first experience of Tarmac came on the Nicky Grist Stages. Despite his inexperience, the Norwegian will be gunning for glory in his French pocket-rocket.

Local rising-star Adam Bustard with Aaron Johnston on the pacenotes will hope to emulate their Circuit of Ireland podium on home turf this weekend.

The pair are chasing a top four finish in the championship standings and are looking for the Ulster to springboard them onto a good end of season run in their Ford Fiesta R2T.

The striking Toyota GT86 CS-R3 will return to the series after BBC Top Gear star Chris Harris’ outing on the Mid Wales Stages earlier in the year.

Behind the wheel of the BRC3 car on the Ulster will be Belfast-based driver Will Corry who will want to show the true potential of the car in Tarmac-trim.

In BRC4, the battle between Marty Gallagher (Peugeot 208 R2) and Callum Devine (Opel ADAM R2) is set to enrage once again as both look to haul in series points leader Tony Simpson, who has elected to miss the Irish round.

Circuit winner Donnie Macdonald (Mitsubishi Evo 9) will want to return to winning ways this weekend as Ashley Field, in a rather potent Darrian T90 GTR, will want to put the cat amongst the pigeons on the Tarmac event.

BRC Championship Manager Iain Campbell is eagerly anticipating round six of the championship.

“The BRC is all set for a two-day titanic Tarmac test,” enthused Campbell. “It is great to be returning to the legendary Irish asphalt and all the challenges it brings.

“The day on Tarmac on the Nicky Grist Stages helped competitors get their eye in for the remainder of the season.

“Crews will be looking forward to the all-asphalt Ulster Rally as it will be new for the majority of the competitors with its new base in Derry/Londonderry.

“The event has such heritage and it is great for the BRC to be part of it. Not only will our teams battle each other, they will also go head-to-head against the Irish Tarmac Championship runners for the outright win. The pace is going to be phenomenal.”

The new-look BRC takes in seven events across the British Isles as it tours England, Ireland, Wales and Scotland before culminating on the iconic lanes of the Isle of Man.

Asphalt special stages and gravel tests will see the country’s best drivers in the best cars fight for overall supremacy on the best events, while the action will feature throughout the year on Channel 4 and BT Sport.

The final event will count for double points, while each driver has one ‘Joker’ to play on one of the first six rounds.

Selected a week before each round, a ‘Joker’ can only be played once and will enable a driver to double the points scored on that nominated event.