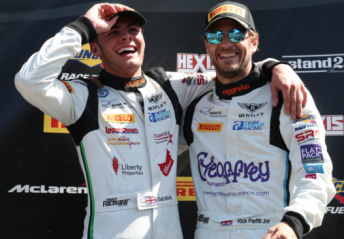 MEDIA RELEASE: British GT Championship front-runner Seb Morris goes into next month’s season finale at Donington Park third in the title race after he and team-mate Rick Parfitt Jnr raced to their fifth podium of the season at Snetterton 300 Circuit on Sunday, August 7.

Bouncing back impressively from a challenging qualifying on Saturday, August 6, the Team Parker Racing pairing converted sixth on the grid in round seven on Sunday morning to a hard-earned top three result.

In round eight later in the day, a fifth place finish from ninth on the grid ensured they go into next month’s final round well on course for a target top three series finish at least.

“I’m over the moon with a third and fifth to be honest”, said the Marford 20-year-old, “It’s not been our track, it doesn’t suit the characteristic strengths of the car, but we’ll go to Donington without any success penalty now so we’ll definitely try and go for the win there to end the season on a high.

“Anything can happen, it’s going to take a lot for us to win the championship but our aim has always been to try and finish top three in our first season. It’s been a learning year, so to be in contention at this stage is fantastic and shows what a strong season we’ve had so far.”

For round seven on Sunday morning, Parfitt Jnr took the opening stint at the wheel of the No.31 Bentley Continental GT3 and he maintained his starting position of sixth through the first few turns before moving up into the top four when two cars tangled at Agostini.

Swarming all over the back of the third placed BMW of Lee Mowle, Parfitt Jnr shadowed his rival lap after lap before assuming the lead of the contest at the end of lap 14 when the top three cars pitted to serve their driver-change stops.

Parfitt Jnr pitted the next time around to hand the Bentley over to Seb who threaded back into the race in fifth – with the leading car still to pit.

When all stops had been served, the MSA Team UK driver held fourth and he spent the remainder of his stint soaking up immense pressure from the Aston Martin of Jonny Adam.

With rarely more than a few tenths of a second between them, Seb didn’t put a wheel wrong and produced an impeccable performance to keep the Aston behind all the way to the chequered flag on lap 32.

As a result of a time penalty for the ‘winning’ BMW of Joe Osborne, though, the Bentley was elevated into third place.

“The pressure I was under was probably the most I’ve experienced in any race to be fair – I thought I did well to keep him [Adam] behind”, said Seb.

“I don’t know what’s been wrong with the car this weekend but we really struggled to slow the car down anywhere, that’s been having an impact on our straight-line speed.

“We knew after practice it wasn’t going to be our best weekend, but Rick and I have had our mature heads on and we made the most of everything.

“Rick did a great job in his stint, then we had a great pit-stop strategy from the boys, and after that it was a case of me handling the pressure from the Aston – it had at least 30 metres on us in braking, and had us on traction too, but I held him off.”

Seb took the first stint of round eight on Sunday afternoon and by the time the cars headed into the infield section he had already moved up from ninth into seventh place.

Determined to break into the top six as quickly as possible, on lap three the Welshman did just that and immediately began to close on the Aston Martin of Jon Barnes.

Lapping within 0.4 seconds of the race leader’s pace at that stage, Seb ran just a few tenths of a second shy of the Aston but remained in sixth to the mandatory driver-change stop.

Pitting at the end of lap 17, one of the first GT3 drivers to do so, Seb handed the car over to Parfitt Jnr who joined the race with just under half an hour to go.

Holding sixth place initially, an issue for one of the other front-runners elevated the Team Parker car into the top five and despite closing to within just 0.4 seconds of the Aston, now in the hands of Mark Farmer, he had to eventually settle for fifth at the flag on lap 32.

All attention now turns to the grand finale of the British GT Championship season, round nine at Donington Park Grand Prix Circuit in Leicestershire, over the weekend 10th/11th September.

Seb and Parfitt Jnr go into the concluding two-hour contest, which awards double points, 27.5 points shy of the series lead – with 37.5 up for grabs for the race win.