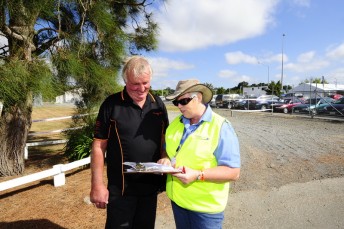 MEDIA RELEASE: Women in Motorsport New Zealand (WiMNZ) has joined forces with the Virgin Australia Supercars Championship (VASC) and Women of Australian Motor Sport (WAMS) to launch a new motorsport officials exchange programme that will strengthen ties across the Tasman.

This is the first programme of its kind available for New Zealand’s female motorsport officials, and the first major initiative from Women in Motorsport New Zealand, which is an advisory commission of the country’s governing body of motor sports, MotorSport New Zealand.

Called the Virgin Australia Supercars Championship Trans-Tasman Female Officials Exchange, from the Australian perspective the new trans-Tasman exchange is an extension of the highly successful WAMS officials exchange programme which is now in its fourth year of sending female officials to work between signature Australian motorsport events and the Singapore Grand Prix.

Capitalising on the strong relationship between Australian and New Zealand motorsport communities, the inaugural VASC Trans-Tasman Female Officials Exchange Programme will recognise the valued contribution made by many women officiating in motorsport on both sides of the Tasman. It also shows the commitment of both countries’ motorsport governing bodies to supporting and promoting the inclusion and development of female officials between Australia and New Zealand.

Deborah Day, the MSNZ board member who heads WiMNZ, said: “I’m very pleased that we can offer a New Zealand female motorsport official this opportunity, thanks to Virgin Australia Supercars Championship and our counterparts at Women of Australian Motor Sport.

“There is a fantastic array of activities lined up for our selected Kiwi official to participate in at the Gold Coast 600, which will be of immense value to the official and, in turn, to New Zealand motorsport,” Mrs Day said.

“This is an important first step in WiMNZ’s role in a wider initiative to develop women in leadership and senior officiating positions globally, and also strengthens our working motorsport relationships with Australia.”

Supercars Australia Chief Executive James Warburton said: “Women are an integral part of the Virgin Australia Supercars Championship. We are fortunate to have strong female representation across our teams, our officials and a passionate female fan base. We are committed to giving more women an opportunity to build careers across our sport and this programme does that by giving female officials the chance to broaden their experience and skills.”

WAMS Committee member and Officials Working Group representative Dr Karyn Lun said that the success of the exchange programme with Singapore and Formula 1 has been a great platform to showcase the depth of talent in Australian female official ranks, and to build on that success with VASC and New Zealand is an exciting development.

“WAMS is grateful to the Virgin Australia Supercars Championship for the support that has made the VASC Trans-Tasman Officials Exchange a possibility, and we’re excited to be working with our New Zealand counterparts on what is sure to be just the beginning of a long and fruitful association,” said Dr Lun.

For New Zealand female officials, the selection criteria is as follows:
· be a MSNZ accredited official of Silver grade or higher;

· hold a current passport with at least 6 months’ validity from October 2016;

· provide contact details of two senior MSNZ officials who support your application and can be contacted for references;

· tell us in 300 words why you should be selected to represent WiMNZ, MSNZ and New Zealand as an official at the 2016 Castrol Gold Coast 600.

For Australian female officials, the selection criteria is as follows:
· be a CAMS accredited official of Silver grade or higher;

· hold a current passport with at least 6 months’ validity from November 2016;

· provide contact details of two Senior CAMS officials who support your application and can be contacted for references;

· tell us in 300 words why you should be selected to represent WAMS, CAMS and Australia as an Official at the 2016 ITM Auckland SuperSprint.

Applications are now being sought and will close on 14 August 2016. The VASC Trans-Tasman Female Officials Exchange Programme application form can be found online via the following websites: