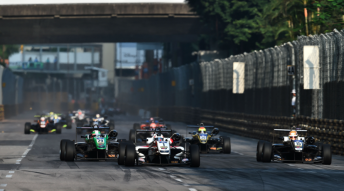 MEDIA RELEASE: The 63rd edition of Macau’s annual sporting event, the Macau Grand Prix, will be held this year from November 17-20, 2016.

During the event, Mr. Pun Weng Kun, President of Sports Bureau of the Macao SAR and Mr. Alvin Chau, Chief Executive Officer and Director of Suncity Group, marked the signing of the sponsorship agreement with the presentation of a giant cheque.

Sports Bureau President Mr. Pun Weng Kun expressed his gratitude to the Suncity Group for their promotion and support of the event, and towards the development of local sport.

Since it began, each year the Macau Grand Prix is warmly welcomed by local and international competitors, as well as fans and visitors from all over the world.

Over the years, the success of this international event has relied upon the vital support and cooperation by Macao SAR Government departments and professional associations.

This year, the Macau Grand Prix will be run by a new Organising Committee which will continuously coordinate the preparatory work of other departments, partners and individuals to ensure exciting and thrilling races for audiences.

He noted that Suncity Group was honored to take title sponsorship of Macau Grand Prix for the third consecutive year, and looked forward to the collaboration.

The Macau Grand Prix continues to grow each year, with the 62nd running of the event posting record revenues of MOP53 million.

More than 80,000 spectators filled the grandstands in 2015, in excess of 1,000 media representatives from 19 countries and territories covered the Grand Prix for over 200 news organisations, and the Grand Prix was telecast in 934 separate broadcasts for a combined total of 752 hours to countless millions around the world.

Promotion for this year’s event continues to gather pace after a Macau Grand Prix roadshow at the Shanghai Chinese F1 Grand Prix in April and in Wuhan in May.

The Grand Prix is again benefitting from the strong support of the Macau Government Tourism Office (MGTO) and, since April this year, has already featured in numerous promotional events in Mainland China, Chinese Taipei, Korea, Australia, France and the USA.

Further promotional events will be held in Shenyang, Zhaoqing, Shenzhen, Hong Kong and Nanjing between now and October. Once again, a number of educational visits to the Macau Grand Prix Building are being held, with students from several local schools visiting between March and July.

Action on the Guia Circuit begins with two practice and qualifying days, with races held on the weekend of November 19 and 20. Tickets range from MOP50 (USD6.50) for practice days up to MOP900.00 (USD115.00) for a spectator seat at the Lisboa Stand for each of the race days.