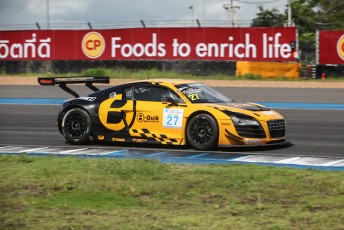 MEDIA RELEASE: The second round of Thailand Super Series (TSS) 2016 saw the championship return to Chang International Circuit in Buriram, last weekend and our three B-Quik Racing drivers racing in Super Car, Henk J. Kiks and Daniel Bilski in GTM and Attapot Sriprom in GTC, all took a trip to the podium as we consolidated our positions in the championship classifications at the season’s halfway point.

We hit the ground running during the TSS season opener back in May and last weekend we were aiming to build on that strong performance to ensure Henk and Daniel collected points in both races. Achieving that result was a good reward for all the work the team has put in during the seven-week break between the rounds.

As usual Henk and Daniel were very evenly matched as soon as they started lapping the 4.554 km, 12 turn circuit although the Australian had additional success ballast to carry thanks to his triple podium back at the first round. As usual with these two drivers once the lights went green there was plenty of inter team scrapping going on.

In Race 1 Henk made a superb start and quickly locked onto the back of the Ferrari of Kantasak Kusiri in front of him in a battle for fourth place that would rage for many laps. The reigning Super Car GTM champion wouldn’t make any mistakes all race and the evenly matched nature of the contest meant Henk had to settle for fifth place which bagged him the final step on the podium. Daniel, recovering well after a poor start, followed Henk home to make it a 5-6 finish for B-Quik Racing in GTM and collect useful Teams’ championship points.

In Race 2 it was Daniel’s turn to take a trip to the podium as he secured fifth place, our two Audis turning in a very similar performance to the first race. It was looking like the B-Quik cars would finish together again as they were once more very evenly matched but a late race spin for the Dutchman dropped him down the leaderboard although he was able to safely recover the car and come across the line in ninth place and pick up further points. Due to the recent arrival of a full support parts inventory we planned to run both our recently acquired Porsche 996 GT3 Cup cars in Super Car GTC for the first time with occasional B-Quik driver Thomas Raldorf drafted into drive the second example alongside Attapot Sriprom who debuted a single entry at the season opener back in May.

However engine warning advisories on Thomas’ 996 meant the team decided to take a precaution and withdraw the car which we expect back in action for the next round.

That left Attapot as our sole representative in GTC and he didn’t disappoint. He made a trip to the podium on his Super Car debut in May and the young Thai did it again in the first race as he brought the #99 Porsche home in fifth place.

It’s a tough learning year for Attapot as he makes a huge step up from our Super Eco programme to run in Super Car, but he’s driven very well in both rounds and is steadily getting to grips with the Porsche’s characteristics. In Race 2 he was given a time penalty for exceeding track limits and that dropped him down to seventh place, but still gave him extra points towards the Drivers’ championship. 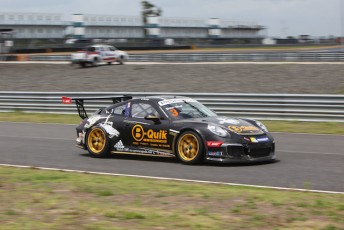 Shaun Varney drove in Porsche Carrera Cup Asia at Chang International Circuit last weekend, marking the first time we have ever entered the one make series

We were very pleased to make our debut in Porsche Carrera Cup Asia (PCCA), entering a car for Shaun Varney who was available as a replacement engine that was required for our Super Car GTM Porsche 997 GT3 Cup, his original entry for the weekend, didn’t arrive back in Bangkok in time for this round.

This was Shaun’s first ever time at the wheel of a Porsche 991 GT3 Cup and he didn’t disappoint at all showing raw speed during practice, qualifying and the races.

After starting near the back following a 10-place grid penalty he tenaciously fought his way up the pack in both races to second place in the highly competitive Class B but was unfortunately unable to finish the races.

However he impressed everyone greatly on his first time in the 991 and we were satisfied with our debut weekend in PCCA. 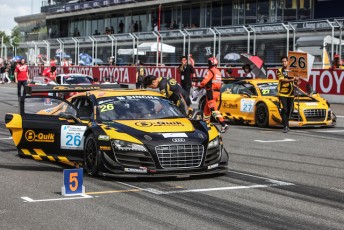 Once again we had Sathaporn Veerachue and Narin Naeosathon entered in our two Honda Brios. These drivers were chosen for our Super Eco programme after a company wide ‘search for a star’ and they continued to learn the racing ropes with Narin taking a trip to podium in the ‘Plus’ class in Race 1.

Henk J. Kiks: “Bit of a mixed weekend in terms of results, it was a tough one for sure so it’s pleasing that we kept up a run of podiums and brought home points to keep us well placed in the standings.

“Certainly Daniel and I had a lot of fun scrapping in both races but in the first race I got caught up behind Kantasak and he simply didn’t make any mistakes and had the power to always keep ahead so it was frustrating as we clearly had more overall pace.

“In the second race it was a bit annoying to have a spin near the end and drop some points but all in all we’re satisfied with the weekend. The team had to work very hard the whole time and we have absorbed the extra cars we are running this year very well.

“It was disappointing that Thomas didn’t get to race the other 996 but we decided precaution was best so we can thoroughly check out the issues back at the raceshop. Now we look forward to the next round of the series and will be clearly targeting more points and more podiums.”

Daniel Bilski: “The weekend was always going to be a challenge, given I had to carry 50kg success ballast. Going into qualifying, it was a case of minimising laps in qualifying to save tyres for the races. Qualifying P6 in both races was about as good as we could have expected. I had a terrible start in Race 1 and was passed by five or six cars into Turn 1.

“The rest of the race was about pushing hard to regain positions, which I managed to do, finishing P6. It was actually a lot of fun charging through the field with some pretty fierce overtaking required. With the weight penalty and the poor start, finishing P6 wasn’t too bad.

“In Race 2 I got a great start and given the performance gap to the Lamborghini and the Toyotas on the weekend, there was no way to get near them. I had a great tussle with Craig Corliss in the V8 Supercar, and had to drive consistent yet aggressively to have any hope of not only catching Craig, but also hopefully passing him. With the Holden’s straight-line speed advantage I had to attack in the corners and under brakes, eventually getting past.

“In the end, my brakes were suffering badly, and the Ferrari in P4 was that bit too far ahead to catch. P5 was all we could do. It was a physically demanding weekend as we had to remove my cool box and helmet air vent to reduce the weight of the car. With 75kg added, the committee ballast and success ballast, we had no choice but to remove it.

“That made it a very hot weekend in the car. After that weekend, the Championship challenge got a lot bigger, but I will be pushing to the maximum at the next round for more points. The only up side of finishing out of the top three is that we can drop some of the success ballast from the weekend and hopefully be a little closer to the top step.”

Shaun Varney: “I had a tough weekend in my Porsche Carrera Cup Asia debut. After receiving a ten-grid position penalty in race one for a red flag infringement I managed to work my way up to second in class and ninth overall before retiring with mechanical failure proving we have the pace to compete in PCCA.

“In Race 2 we managed to make our way up to second in class before contact at Turn 3 forced us out of the race. Overall I believe I showed a lot of potential in my first drive in a 991 GT3 Cup and I’m looking forward to my next opportunity to compete in PCCA. A big thanks to B-Quik and the team at B-Quik Racing as well as the crew at Modena Motorsport.”