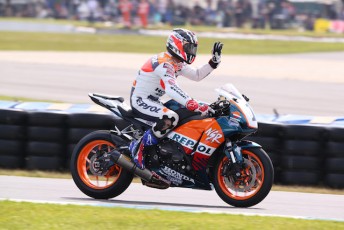 MEDIA RELEASE: With just 100 days to go until the world’s best motorcycle riders take to the circuit at the Michelin Australian Motorcycle Grand Prix 2016, the biggest names in MotoGP in Australia have reflected on what they love most about the Phillip Island event.

A highlight of the Australian sporting calendar, the iconic Phillip Island Grand Prix Circuit has seen both thrills and spills during its celebrated history and is a favourite amongst riders, none more so than former five-time world motorcycle champion, Mick Doohan, and current MotoGP hopeful, Jack Miller.

Doohan, who claimed three Australian Motorcycle Grand Prix wins, believes the event is one of the premier races on the global calendar and holds particular personal significance for him.

“The Australian Motorcycle Grand Prix at Phillip Island is a very special event and one I have incredibly fond memories of,” said Doohan.

“The long straight, the fast and flowing turns, the tight hairpin; it’s really just a beautiful circuit to ride and I still feel incredibly lucky to have had Phillip Island as my home race.”

“Nowadays, I get just as much of a thrill seeing the likes of Marc Marquez, Valentino Rossi and of course, young Jack Miller, lean into Turn 1 (the Doohan Corner) as I would if I was out there myself,” said Doohan.

For Miller, who recently claimed his maiden MotoGP victory in the Netherlands and hopes to stand atop the podium in Phillip Island come October, it’s the local support that means the most.

“The Australian Motorcycle Grand Prix is most definitely my favourite event on the MotoGP calendar. The atmosphere at ‘The Island’ is like nothing I’ve experienced anywhere else in the world and the track itself is unreal – even at 350km/hr it’s impossible not to take in the epic surroundings,” said Miller.

“Words can’t describe the feeling I get when I head out from the pits onto Gardner Straight and see the ocean right there in front of me. The fans then just take it to that next level; they’re so supportive and give me a real buzz when I’m racing – it doesn’t get much better than that.”

Australian Grand Prix Corporation CEO, Andrew Westacott, is thrilled with how ticket sales for the world-class sporting event are progressing with sales on track to surpass last year’s results.

“Australia is a sporting nation so it is no surprise that fans from around the country are snapping up tickets to the Michelin Australian Motorcycle Grand Prix 2016 – especially following Jack Miller’s fantastic victory only a few weeks ago,” said Westacott.

“With many of our hospitality packages already sold out, fans are encouraged to rally their mates together and purchase their tickets to avoid missing out on all the action.”

Race goers looking to attend the iconic Phillip Island event will receive up to $20 off selected general admission tickets if they purchase online before July 31.

For more information and to purchase tickets please visit: www.motogp.com.au.