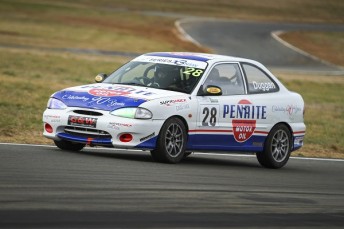 The 23-year-old made headlines when she competed in the opening round of the Kumho V8 Touring Car Series at Sandown in April, and while Duggan is continuing to piece together the remainder of her Kumho Series campaign, she continues to gather valuable seat time in the highly competitive one-make series for Hyundai Excel race cars.

“Racing the V8 Supercar was an amazing experience and certainly gave me the appetite for more, but I still enjoy racing the Excel and I can’t wait to get back behind the wheel this weekend,” Duggan said.

“Up until now, I have only done short sprint races, so I’m looking forward to the challenge of a longer endurance event, and thinking about the aspects of race strategy and driver fitness.”

Teams competing in the endurance race have the option of running one or two drivers, and while some of the other contenders have elected to run a co-driver, Duggan will run solo.

“I weighed up the options and while it would have been tempting to bring in an experienced co-driver, for my development as a racing driver I wanted the experience of doing the whole race myself,” Duggan said.

“It will train me to focus and maintain concentration for a long period of time, which will be a beneficial skill to take into other categories in the future.”

Duggan recently became an ambassador for the Australian-developed and manufactured Supashock Racing Suspension, which has developed an enviable reputation over the last couple of years through its success at the very top level of Australian motorsport – including the coveted Bathurst 1000 – along with its use in international categories such as the cutting edge Formula E World Championship.

Duggan ran the bespoke Supashock Excel damper kit – designed specifically to generate the optimum handling balance for the Excel race car – in the previous round of the series and after a productive test day yesterday, she believes it will be a real advantage.

“It’s great that Supashock’s success in premier categories can filter down into state-level series, and I’m proud to represent the brand,” Duggan said.

“When I installed the Supashock product in my car for the last round, I noticed an immediate improvement to the previous setup, and yesterday’s test day was about exploring the Supashock package further and fine-tuning it to suit Wakefield Park’s technical layout.”

The McAlister Hyundai Series X3 enduro commences with qualifying and sprint races on Saturday and Sunday morning, followed by the one-hour enduro on Sunday afternoon.