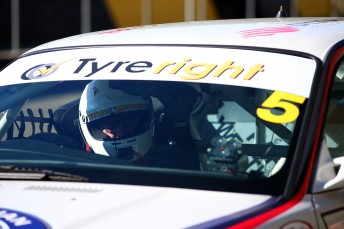 Twenty entrants signed up for the Sydney Motorsport Park event, held across July 1-3, with plenty of action unfolding from start to finish. Two 250km races were held across the Saturday and Sunday – for a full event report, please click here (Saturday report) or click here (Sunday report).

Tyreright General Manager, Perry Scarfe said the company thoroughly enjoyed its partnership with the Series and looks forward to being involved with Australia’s production car scene into the future.

“We could not have been made to feel more welcome by, not only the management of the Australian Production Car Series, but also their team, the racers, on-track officials, commentators and the fans,” said Mr Scarfe.

“We were welcomed with open arms and it was great to see the Tyreright logo whizzing around the Sydney Motorsport Park venue on the windscreens and body panels of the APCS entrants all weekend.

“The Series and the production car racing scene in Australia certainly has a bright future, and we look forward to continuing to be a part of it moving forward.”

“Tyreright has a long standing association with Sherrin Racing who introduced Tyreright to the series. Iain and Grant Sherrin have been great supporters of Tyreright and we are proud to be able to give back by working in with the APC series and Sherrin Racing” said Mr Scarfe

Australian Production Car Series Category Manager Iain Sherrin said it had been a pleasure to have Tyreright on board.

“To have the support of a company such as Tyreright behind our Sydney event was very much appreciated, and we are pleased that they enjoyed their experience with our Series,” said Sherrin.

“We very much look forward to continuing to work with them into the future, as Australian production car racing continues to grow and expand.”

The next round of the Australian Production Car Series will be held at Queensland Raceway, across July 29-31, 2016.