STCC hits halftime at the fastest circuit in Sweden

STCC hits halftime at the fastest circuit in Sweden 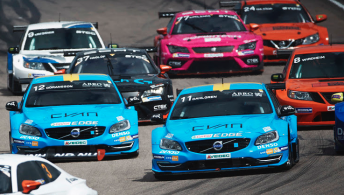 MEDIA RELEASE: The Scandinavian Touring Car Championship (STCC) hits halftime at Falkenberg, the fastest circuit in Sweden with an average speed of over 150 km/h, this weekend.

”I love coming to this circuit as it’s fast and produces extremely close qualifying sessions. My speciality is qualifying and although I have a lot of penalty weight, I feel really confident ahead of the weekend,” said Robert Dahlgren who leads the championship.

”I was a bit concerned after Anderstorp where I lacked some pace, but we found a technical error that hindered me. I got two podiums despite that and the issue has been fixed, so I do of course aim even higher for Falkenberg,” said Richard Göransson.

Prince Carl Philip heads to Falkenberg with fond memories, having secured his maiden STCC victory in the second race there last year.

”Falkenberg is one of my favourite tracks and I am really proud over my win here last year. We are slowly moving forward after missing the first race weekend of the year and I hope to claim my best results of 2016 this weekend,” said Prince Carl Philip.

Falkenberg is an overall successful circuit for Polestar Cyan Racing with more STCC victories, fastest laps and pole positions than any other team.

”Falkenberg has historically proven to be a track that suits our team very well, even to the extent that if we don’t win we are asked what happened. This of course puts a lot of pressure on our team but we come well prepared, we will work harder than everyone else and deliver,” said Alexander Murdzevski Schedvin, Head of Motorsport at Polestar.

The STCC weekend at Falkenberg starts on Saturday with testing and qualifying, followed by two races on Sunday.