B-Quik fields its biggest ever team for TSS

B-Quik fields its biggest ever team for TSS 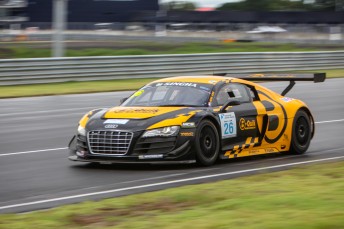 MEDIA RELEASE: B-Quik Racing lines up this weekend for Thailand Super Series’ return trip to Chang International Circuit in Buriram for round two of the year with its biggest ever team, comprising of seven drivers in seven cars.

At the top of the B-Quik entry list, Henk J. Kiks and Daniel Bilski will drive Audi R8 LMS Cup racers in Super Car GTM for the second consecutive event.

The pair demonstrated impressive pace during the season opener back in May and so they will be looking to build on that rewarding weekend, which in fact netted four podiums from the three races.

That event left us very well positioned in the Super Car GTM Teams’ championship, holding down provisional second place, and both drivers will be looking for fast and consistent performances over the next few days as we aim to close down the points’ deficit to the leading team.

Daniel, with an impressive second and two third places from the season opener, will however be carrying a full compliment of ‘success’ ballast for this weekend’s two races so that means the Australian is going to have to play a much more tactical game.

That’s the dazzling lineup for Super Car GTM, the fastest and most competitive motorsport championship in Thailand, but when we take one step downwards to Super Car GTC, here, for the first time, we will have two entries.

That’s because with the recent arrival of a full complement of spare parts we can finally turn out both our newly acquired Porsche 996 GT3 Cup racers.

During the opening round of the TSS season back in May we ran a single Porsche 996 GT3 Cup for Attapot Sriprom who was graduating from our Super Eco programme.

That was a huge step for the young Thai driver to make, but he did it superbly, getting used to an entirely different type of racecar and one that has vastly more horsepower on tap.

Attapot took a well-deserved trip to the podium to make it a rewarding debut weekend in Super Car GTC for team and driver as well as giving our new Porsche 996 GT3 Cup silverware on its first race.

For this weekend’s action Attapot will be back once again in the #99 entry and with a support inventory now available we have both examples on the entry list.

The second ‘996’ will be in the hands of Thomas Raldorf who reunites with the team having driven our Porsche 997 GT3 Cup in Super Car GTM here a couple of years ago.

Then he finished on the podium and so expect the highly experienced Danish driver, a former outright winner in the Super Car top class, to be at the very least right in the hunt for the podium positions.

Thomas will lack running time though as during yesterday’s first day of track action his opening session was abruptly curtailed early on after a warning light came on and the team decided to change the engine in the #25 Porsche as a precaution, leaving him sitting idle on the sidelines for the day.

But he knows this track inside out and has plenty of experience racing Porsches so this should be of little concern.

Shaun Varney meanwhile has been drafted in this year to race our Porsche 997 GT3 Cup in Super Car GTM but he suffered ill luck during the season opener back in May when engine problems arose and with the unit having not arrived back yet from its rebuild in Europe he will instead join Porsche Carrera Cup Asia (PCCA) for the weekend.

PCCA is linking up with the TSS programme for this round for a second consecutive year and that means it’s a perfect opportunity for the New Zealander to get to grips with the new-generation Porsche 991 GT3 Cup in this highly competitive one make series.

It also marks the first time B-Quik Racing has ever lodged an entry in PCCA.

Finally our two Honda Brios will return to the Super Eco action in the hands of Narin Naeosathon and Sathaporn Veerachue.

The pair were chosen to drive our smallest cars this year following a rigorous ‘driver search’ programme that was conducted within the company.

Judging by the results they turned in during the first round it looks like we have hit on a couple of ‘stars of tomorrow’ and so we expect to see Narin and Sathaporn to knuckle down and continue their learning curve this weekend.

Henk J. Kiks said “We need to build on the first races where we clearly showed we have front running pace in the Audi and are heading in the right direction, we have to aim to be pulling in points to keep us in contention and work hard all weekend so we are right in there when the checkered flag comes out.

“It looks like weather’s going to play its part over the weekend, it certainly did yesterday with the track conditions changing with every session, but I think we are well prepared for rain.

“We have a few things to sort before the races but I think that we are in a good position.”

Daniel Bilski said: “It’s been great to get back in car after a number of weeks away. The conditions are quite variable at the moment so it was good to get some wet and dry running done to work on set up of the car [yesterday].

“With the success ballast from the previous weekend I have to carry for the next race it’s going to be extremely tough to challenge for the front row in qualifying, but we will be doing everything possible to maximise our points for the weekend. I can’t wait for Saturday … whatever the weather!”

Shaun Varney said: “I’m really looking forward to this weekend at Chang International Circuit in Buriram for my debut in Porsche Carrera Cup Asia and the opportunity to represent B-Quik Racing.

“The competitiveness of the one make series as well as the high driving standards attracted me to the class. It will be an all new experience for me having not driven a 991 Cup car before but I’m up for the challenge!”

Attapot Sriprom said: “It’s been great to step up to Super Car GTC in the Porsche, but it’s a huge jump from racing the Brios and clearly I have a lot to learn and a lot to extract from myself and the car.

“The first race I was lucky to finish on the podium so that was a great start and good for the team. This weekend I will be looking to continue to improve my laptimes, learn more and try to get a good result.”

Thomas Waldorf said: “I’m looking forward to again joining the Super Car class. Last time I raced in it was also for B-Quik in Buriram in 2014 in their 997 in GTM where I finished on the podium.

“This time it will be in the 996 in GTC and this is a new car for me but should be both reliable and competitive. I am very grateful that I together with my sponsors Mr. Henk was able to come up with this opportunity.”