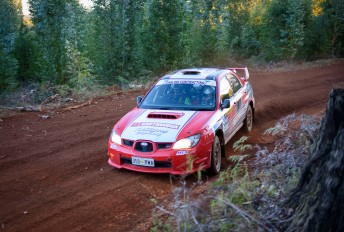 MEDIA RELEASE: The Quit Experts Cup in Collie turned out to be a dream run for all the Onslow Contracting Western Australian Rally Championship competitors, and a positive turning point in the season for many who had been battling mechanical issues.

Even the conditions were close to perfect, with the rain holding off on the Saturday to give competitors a dry event.

The round was dominated by Dylan King and co-driver Abbey Hayes, navigating their Subaru WRX through the forest terrain to win all six stages.

“It was a better weekend for us, that’s for sure!” said King. “We’re pretty happy with winning all six stages.”

“In last month’s Boddington round we had a minute lead after the first two stages when the wheel studs snapped on the left hand front wheel, which caused the wheel to go flying and as a result the front control arm ended up bent. That was us out of the rally – but Collie went perfectly.”

Competitors will now have an eight week break before the next round. King says he is looking forward to the time off.

“It’s been hard work having the rallies so close together. So I’m going to enjoy the break, and will try and get the bank account up again.”

In second place, with less than a minute to the leaders, was Maximum Motorsport duo Brad Markovic and co-driver Glenn Macneall.

The team took a break from the Australian Rally Championship to re-join their home series for this round. It hasn’t been an ideal start to the rally season for Markovic, who has had difficulty with his confidence after his Subaru WRX caught fire at the Forest Rally.

“Collie was the perfect way to get back on track for us,” said Markovic. “Glenn wasn’t with me for the International Rally of Queensland, so it was great to have him back in the car. The round was also good opportunity to regain my confidence in myself and the car.

“We crossed the finish line having achieved everything we wanted to do with the car. We weren’t going out there to do anything silly, we were more using it to test a few different pieces.

“The biggest thing was that we enjoyed the rally – because the past three events have been pretty tough. It was nice to get back out there to just have fun, and enjoy being back in the car.

“We will now turn our focus back to the ARC, and Rally South Australia in eight weeks’ time.”

Markovic’s Maximum Motorsport stablemates John O’Dowd and Ben Searcy rounded out the top 3 with just under a minute and a half to the leaders.

It was fourth place John Macara who wore the widest smile at the event, after he and co-driver Caleb Ash broke the three year run of mechanical trouble in Macara’s Mitsubishi Evo.

“The car has not finished for the past three years, but ironically on our 13th event we’ve done it, and I have been able to cross the finish line,” said Macara. “I am a Dockers fan, so I can relate to their losing streak.

“We were really happy with the way our event went – we were running second after the first two stages.

“We’ve had so many mechanical issues, but the rally community has banded together and helped us out for Collie. Allstar Garage changed the gearbox and clutch which was fantastic, and Thornlie Towing volunteered to tow the race car.
“It was funny because we had issues with our daily driver, so that ended getting lift home on the back of the tow truck and we drove the rally car home. If I wrote a book about my rally adventures, I’m sure people wouldn’t believe it!”

Razvan Vlad and co-driver Daymon Nicoli continue to be seemingly untouchable in the 2WD category this year.  The team were especially pleased with the Quit Expert’s Cup result which broke a two-year run of bad luck at the Collie round.

“It was a terrific rally for us – we had no mechanical problems” said Vlad. “The last time we finished an Expert’s Cup was in 2013.

“I went really hard on the first stage to see if I could try to get a top six, but we missed out by about three seconds, so then we backed off a bit. We still had really good fun.

“The rally was quite enjoyable because it started and finished early, and the roads were perfect – you couldn’t ask for anything more!

“The car is in perfect condition and we could do the next rally tomorrow, but we’ll go and clean it up and give it a check over to ensure we’re ready for Kirup.”

Kody Reynolds and co-driver Anthony Staltari came in 2 minutes and 10 seconds behind the category leaders in their Subaru Impreza.

“It was a great weekend and the car ran beautiful,” said Reynolds. “We had a gearbox issue at Boddington but changed the gearbox to one with lower ratios, so it’s quicker out of the corners now.

“The roads were great, and I’d say they are probably some of the best in the championship.

“I didn’t really look at the times too much but apparently we got quite close to Raz – which is really good because we haven’t been able to get to him at all so far this year.”

David Farnworth and co-driver Nick Clements crossed the finish line in their Toyota Corolla 3 minutes and 43 seconds behind Vlad and Nicoli.

Mitchel Clarke was really happy with his performance over the weekend after being another one who has had a season plagued by mechanical issues until now. He and co-driver Stuart Clarke finished top of the podium in the Clubman Cup.

“We finally had a smooth run,” said Clarke.  “We’ve had a bad run this season so far. There’s been a few mechanical issues causing us trouble – but the Experts Cup just went magic for us!

“We’re looking forward to Kirup, it has similar good flowing flat roads with hopefully no dust.

“Last year at Kirup we came third and that was only our second gravel event, so it’s a good event for us. “

Dene Courtis and Robert King were in second place after having a less dramatic round than Boddington, which saw them cross the finish line with a few less panels than what they started with.

Rallyrats Carl and Tracey Rattenbury took third place. It was once again a close Clubman Cup battle between the top three, with all finishing less than a minute after the leaders.

Onslow Contracting Western Australian Rally Championship competitors now have an eight week break before they compete in the Wheels on Yirrigan Kumho Tyre Kirup Stages round on September 10. For more information about this round, please visit the RallyWA website.