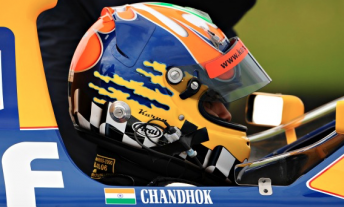 MEDIA RELEASE: Williams is delighted to welcome experienced racer Karun Chandhok as official driver for its Heritage division.
In his new role as Williams Heritage Driver, Karun will focus on the testing and public demonstration of Williams’ historic racing cars.
He will make his first appearance as a Williams Heritage driver at the 2016 Goodwood Festival of Speed (June 23rd – 26th), where Karun will drive up the iconic Goodwood Hill behind the wheel of an FW08C from 1983 and an FW13B from 1990.
Williams Heritage was created to manage the team’s collection of historic Formula One cars, dating from Williams’ first season in Formula One in 1977 to the most recently retired models.
The division showcases these classic racing cars to fans at a selection of events throughout the year, and also identifies and prepares a selection of cars for private sale.
With one of the world’s finest reserves of competition cars with an impeccable pedigree, the Williams Heritage programme presents an exclusive investment and ownership opportunity for active enthusiasts and investors.
As part of his new role, Karun will also act as a driver coach to customers of Williams Heritage who have purchased a running car and use Williams Heritage to run and maintain it.
Speaking about his appointment Karun Chandhok said; “Williams is such an iconic British team, steeped in racing history so it’s a real honour to be involved in its Heritage programme.
“So many of the Williams Heritage cars are pieces of racing history with great stories to tell, so to be offered the chance to get up close and personal and drive them – sometimes being the first person to do so in decades – is an incredible opportunity.
“I look forward to not only demonstrating the cars from time to time, but working with other Williams car owners to help them fully enjoy their experience of driving these pieces of F1 history.”
Jonathan Williams, Williams Heritage Director, said “With a wealth of experience in a wide range of championships, including Formula One, GT, LMP1 and Formula E, Karun was the ideal candidate to be our Heritage driver.
“What’s more, he has a real passion for motorsport history and is a font of knowledge when it comes to Formula One.
“The Goodwood Festival of Speed is a highlight of the motorsport calendar, always providing fans with a truly impressive collection of modern and historic cars. We are very much looking forward to taking part in the event once more.”