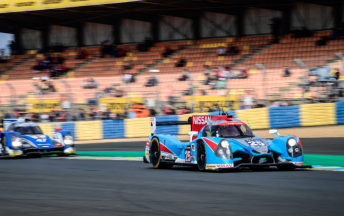 In the 24 Hours of Le Mans, finishing the race is a victory in itself, so everyone in the Algarve Pro team can say now: “we were there and we made it!”

For the 24 Hours of Le Mans, Sir Chris Hoy and Michael Munemann welcomed a new team mate with Andrea Pizzitola, a promising 24 year-old driver from the Renault-Nissan Alliance.

From the Test Day on June 5 to the chequered flag on June 19, Algarve Pro experienced the whole Le Mans package: scrutineering and Drivers’ Parade in the centre of the city, but also the rain in qualifying and at the race start.

On the trickiest and most difficult conditions and maximum pressure one could find at Le Mans, the whole team and drivers ran faultlessly in race.

The team started from row 14 on the grid and finished 12th in the category, joining the overall top 20 in P17.

Andrea Pizzitola was at the wheel at the race start under heavy rain behind the Safety Car and also received the chequered flag. During his stints he regularly made his way in the LM P2 top 10

“Finishing the race was our main goal, so the whole team is very happy. We had an issue with the power steering and also with the lights on the side,” said Pizzitola.

“This resulted in a global time loss of 30 minutes, but we had no major problem. From a personal point of view, I realised how difficult the Le Mans circuit is, but I felt better and better as my stints went on through the race.”

Sir Chris Hoy came on the race track for the first time at 6.35 pm on Saturday evening.

The six-time Olympic medallist fulfilled his dream of competing – and also completing! – the 24 Hours of Le Mans, maintaining a consistent pace during his stints, just as he did in the previous ELMS events at Silverstone and Imola.

“This race was successful for all of us in the team. We are one of the smallest teams in the grid and we were rookies,” said Hoy.

“This was the first time all of us competed together in the 24 Hours of Le Mans and finishing 17th overall is a great result. I raced an LM P2 car for the first time in April, and the Nissan-powered Ligier JS P2 is a fantastic car.”

Andrea Pizzitola and Sir Chris Hoy were on the track for the night stints, Michael Munemann was at the wheel at dusk and dawn, driving as safely and faultlessly as his two team mates.

“We could not be happier. I am so proud of the team and for Portugal. It also was the first Le Mans start for all three drivers, we made no mistakes in the sense that we had no penalties,” said Munemann.

“We could have got a better finish without our technical issues but we eventually finished in the top 12 of the LMP2 class, I could not ask for more. We all put together a wonderful experience, there is nothing else like Le Mans in the world!”

Stewart Cox, the final word of a happy team owner: “The team did a tremendous job since the Sunday morning of the Test Day.

“Everybody excelled in every way, all the drivers were very happy with the balance of the car, we absolutely had no issues with the pit stops. Everybody in the team felt so positive.

“If you asked the drivers if they wanted another stint, the boys came back with a ‘yes, yes, more, more!’ We never experienced the problem with the lights on the side before, and fixing this issue probably cost us three or four laps.

“We could have probably hoped for a better result considering the potential we had. But I am proud of everyone, fantastic week anyway!”

After their first successful Le Mans experience, Algarve Pro will resume the European Le Mans Series next month with the third round of the 2016 season, to be competed on the Red Bull Ring (Austria) on July 17.