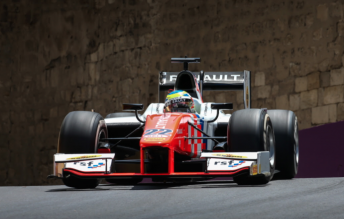 MEDIA RELEASE: MP Motorsport missed out on a podium double in round six of the GP2 Series at the Baku City Circuit in Azerbaijan on Sunday, 19th June, when two highly confused Safety Car re-starts spoiled, what looked set to be, a magnificent celebration for the team.

For the first half of the ‘Sprint Race’ at the brand new street circuit, Daniël De Jong looked likely to secure a podium with a potential second place finish – having started on pole position for the first time in his GP2 career – with team-mate Oliver Rowland right behind in third.

Everything went wrong, though, on lap 10 and also on lap 12 when race leader Nobuharu Matsushita twice drove erratically at two Safety Car re-starts.

The first incident resulted in a lock-up for De Jong, who ran straight-on at the first corner, and the second led to contact from a rival for Rowland. Both situations enforced pit-stops, resulting in De Jong finishing 14th and Rowland in 15th place.

Post-race, officials found Matsushita to have driven in a manner causing danger to his fellow competitors, resulting in a number of collisions, and he has been banned from competing in the next event of the season in Austria at the beginning of July.

During round five on Saturday, 18th June, Rowland finished in fourth position, having looked set for third until a final lap dash following a late Safety Car period, while De Jong produced a storming performance to slice his way through into a fantastic top eight finish from 17th on the grid.

“We know we should have been on the podium in each race but the big positive is the pace Oli and Daniël showed – both drivers were outstanding”, said team manager Sander Doorman.

“They raced fantastically well, showed what they’re capable of and the team did a great job. It’s frustrating to miss the podium through no fault of our own, but we’re all confident for the rest of the season after such a strong weekend in Baku.”

Racing Steps Foundation and Renault Sport Academy racer Rowland was in the upper order throughout the red flag interrupted qualifying session and he ultimately took sixth on the grid for race one of the weekend. De Jong, meanwhile, ended the session 17th fastest.

Saturday’s ‘Feature Race’ began in dramatic fashion with multi-car contact at Turn One resulting in the deployment of the Safety Car straight away.

Rowland made a great start to climb into fourth through the first corner but, just behind, several other cars tangled at the apex.

Fortunately, De Jong managed to avoid the spun car of Norman Nato and he emerged in a much improved 11th place.

Racing resumed on lap three and Rowland judged it perfectly, getting his car into a position to successfully challenge Antonio Giovinazzi for third at Turn One with a great move.

De Jong also impressed at the resumption, slicing his way into the top eight on the first lap back at full speed.

The Safety Car was required again soon after, on lap six, and with the tyre-change window open at that point all of the leading contenders flooded into the pits to switch from Super Soft Pirellis to the Medium compounds.

Rowland emerged back onto the track as the third of the stoppers, fifth overall, with De Jong 10th of the those to have pitted, 12th overall.

On lap eight racing got back underway again but the Safety Car reappeared just a lap later as a result of a stranded car.

At the third re-start on lap 11, Rowland held fourth on the road – third of the drivers to have pitted – with De Jong back into the top 10 in ninth overall, eighth of the stoppers.

Once again Rowland anticipated the resumption perfectly and after running three abreast into Turn One with Nabil Jeffri and Matsushita, the MP Motorsport racer boldly passed both drivers on the inside to leap into second with a stunning pass.

De Jong managed to move up into the top eight as he continued his superb performance, although was edged back to ninth mid-lap by Mitch Evans.

On lap 14, Rowland was elbowed back to third again as De Jong ran bottled up behind Evans and Jeffri but the Dutchman was able to climb back into the top eight when Jeffri ran straight on at the third turn after a major lock-up.

Five laps later, the Safety Car was back on track for the fourth time. Rowland still held third but his team-mate was in 11th position, having been shuffled back outside the top 10, and De Jong opted to pit while the race was under caution to switch back to some used Super Soft tyres.

When racing resumed on lap 25, leader Giovinazzi kept the pack bunched up at the re-start and Rowland lost his podium place when bundled back to fifth in a chaotic first corner, although he moved back into fourth where he ended the race.

While the limited time remaining meant De Jong’s inspired tyre call couldn’t be fully rewarded, he did climb into the top eight to secure his second points finish of the season, back-to-back points after the previous round at Monaco, following one of his very best drives in GP2.

Austria’s Red Bull Ring in Spielberg is the next destination on the GP2 Series calendar with rounds seven and eight of the season taking place over the weekend 2nd/3rd July.