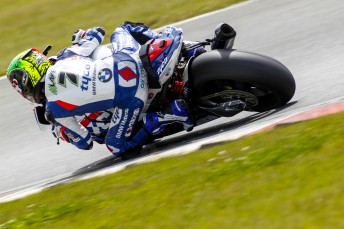 MEDIA RELEASE: Michael Laverty set the pace on the opening day of the official MCE Insurance British Superbike Championship test at Snetterton, firing the Tyco BMW to the top of the times in the closing stages of the final session.

Laverty had snatched the advantage from Luke Mossey after the pair traded blows at the top of the times throughout the final ten minutes and the Tyco BMW rider remained ahead at the chequered flag with Alastair Seeley holding third for the RAF Reserves BMW team at their home circuit.

Honda Racing’s Jason O’Halloran charged up the order in the closing stages to hold fourth position, pushing James Ellison on the leading JG Speedfit Kawasaki back to fifth with Christian Iddon holding off Tommy Bridewell for sixth.

The Bennetts Suzuki rider had been the fastest rider on the track in the opening session, dropping to seventh on combined times with Peter Hickman finishing narrowly ahead of team-mate Leon Haslam.

The ‘Pocket Rocket’ had bounced back from a small crash at Agostini to end the day ninth fastest on his first visit to the 300 circuit.

John Hopkins on the ePayMe Yamaha completed the top ten ahead of tomorrow’s second and final day on track.